The psychology of the seven letters to the seven churches in Revelation?  Is there really something like that?  Why not?  They are letters from Jesus to the churches.  To us.  Who knows how our minds work better than our Creator?  And who better to point out the things that might stand in the way of our salvation than Jesus?

Revelation - The psychology of the seven letters to the seven churches is article #1 in the series: Seven Letters to Seven Churches. Click button to view titles for entire series 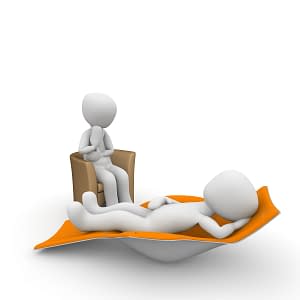 Dictionary.com defines psychology as: the science of the mind or of mental states and processes.  I know there’s a tendency with some Christians to avoid science, but let’s get real for a second.  God invented science!  So what is there to be afraid of?  Nothing.  So let’s proceed with no fear of science or psychology.

I started this concept back in 2003 – seventeen years ago.  Coming from the technology industry, it feels like it should be outdated.  BTW – it’s both me and some of the idea behind this study that come from Information Technology.  To give credit where it’s due – the diagram that you see below originates from a company called The Gartner Group.

They used it to study normal human behavior and the introduction of new technology.  We’re going to look at human behavior and the introduction of Jesus into our lives.  How we react initially, and what we might do as time goes on.  In the next segment, we’ll look at the Parable of the Sower as an example, before getting into the psychology of each of the seven letters.

So, here’s the chart that we’ll use: 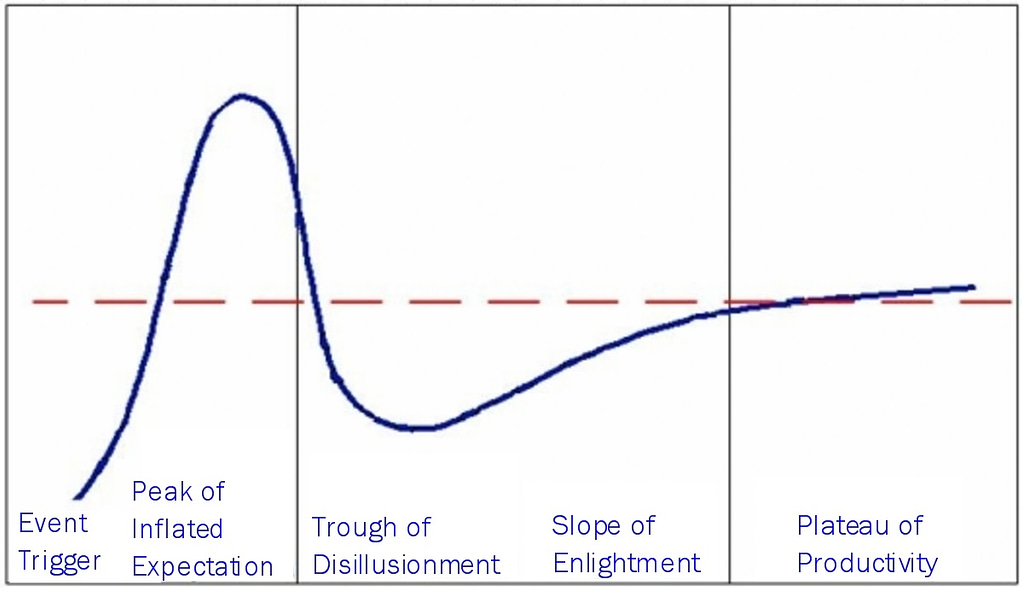 Gartner Group calls it the “hype cycle”.  If you think about it, it’s very common with new technology.  Let’s see how it works with technology products, since that’s something we’re all familiar with.  When we’ve got that process, it’ll be easier to apply it to the psychology behind the seven letters to the seven churches.

The graph starts with the event trigger. It’s the “thing” that caught people’s attention and got the cycle started (or not – if it was a complete flop and didn’t even get noticed). At this point – people don’t really know what to expect. It’s just hoped that someone notices and wants to know more.

If this new product takes off, it starts the move up the slope in the graph.  If it’s a flop, then there’s no graph.  This new thing just disappears off people’s horizons.

The peak of inflated expectation

Next comes the “peak of inflated expectation”.  That’s where there’s a whole lot of interest – probably by people who don’t know all that much about the “thing” in question – and before you know it, they expect that it can do everything.  Whatever technology problem anyone has – this new “thing” will take care of it.  Doesn’t matter what the vendor says – or what the material that comes with it says – people just sort of decide that it can do everything.

Or, as we’ll see, new versions and updates can send an existing product back to the beginning.  Many changes are actually event triggers that start the whole process over.

The trough of disillusionment

Following that comes the “trough of disillusionment” – which is when people start to realize that – no, that thing really doesn’t do everything.  Reality sets in (for the first time).  This is a dangerous time for the “thing”.  If people’s opinions of it get too far out of control – it’s a pretty quick swing from it can do everything to it can’t do anything.

As mentioned, this is another dangerous time for the product.  There’s always the possibility that the disillusionment will be so bad that the trough goes off the charts in a downward direction and the product is dead.  Maybe it didn’t work.  Maybe it was ahead of its time.  Or possibly people wanted something similar to it, but with different features.  No matter the reason, not getting what we want can and does kill products, even if they really were good.

The slope of enlightenment

Then – hopefully – comes the “slope of enlightenment”.  This is where reality sets in for the second time – hopefully, otherwise the “thing” is finished – banished to the scrap heap of good ideas that never quite lived up to expectations, whether they worked or not, being irrelevant.  This time, reality is more likely to be “real” reality – no wild expectations either way – people know it can’t do everything but also realize that it can do something.

This one requires a change in people’s perspective about the product.  After all, the product does what it does.  The question is one of whether we can use it, the way it’s built.  If it takes too long for the slope of enlightenment to go up, the product may very well die out.  There has to be a return on investment.  No one’s willing to put good money after bad, at least not for an unlimited amount of time.

The plateau of productivity

Finally, if the “thing” survives this long – it reaches the “plateau of productivity”.  It has a purpose – people have figured it out – and they like it.  All is well, right?

Well – not so fast there.  It doesn’t show on the chart, but there is the very real possibility that this “thing” can become such a routine way of life that people forget what it was all about in the first place.  They take it for granted – they don’t really remember why they liked it so much before – and the next thing anyone realizes, it’s pretty much forgotten about.  It’s yesterday’s “thing” – and now people want today’s “thing”.  No matter that it’s not the same – no matter that this new thing isn’t as good as the old one – it’s today’s thing and that’s all that counts.

Does this really work with the Seven Letters?

Can you see the psychology of the seven letters in that explanation of the graph?  You should be able to pick any number of technology innovations and see yourself and society in general following exactly what was described.

Hopefully you were thinking about yourself and Jesus while we went through all that.  If you did, you hopefully also realized something.  Whether it’s an individual or a small group or even an entire church, that cycle very much describes our relationship with Jesus.

There is one potential problem you may have thought of as well.  In the technology world, the product changes.  But, as Christians we (should) know that God doesn’t change.  If you need it, here’s a refresher on that thought of an unchanging God.

Finally, God is unchangeable not only in relation to the universe, but in His relations to men and esp. to His people. This follows from His unchangeable ethical nature. The Scripture often connects the unchange-ableness of God with His goodness (Ps 100:5; Jas 1:17); with His truthfulness and mercy (Ps 100:5; 117:2); and with His covenant promises (Ex 3:13 ff). In connection with His covenant promises, God’s un-changeableness gives the idea of His faithfulness which is emphasized in the OT to awaken trust in God (Dt 7:9; Ps 36:5 [Heb 6]; Ps 92:2 [Heb 3]; Isa 11:5; Lam 3:23).

This idea of God’s unchangeableness in His covenant promises or His faithfulness is repeated and emphasized in the NT. His gifts or graces and election are without repentance (1 Thess 5:24; Rom 11:29); He is faithful toward men because unchangeably true to His own nature (2 Tim 2:13); His faithfulness abides in spite of men’s lack of faith (Rom 3:5), and is in many places represented as the basis of our confidence in God who is true to His election and gracious promises (1 Cor 1:9; 10:13; 2 Thess 3:3; He 10:23; 11:11; 1 Pet 4:19; 1 Jn 1:9). See FAITHFULNESS. It is thus the religious significance and value of God’s unchangeableness which is esp. emphasized throughout the Scripture.

That’s a lot of “unchanging”.  How can this graph work?  The whole psychology of the seven letters relies on the graph, and the correct usage of the graph assumes change!

Actually, it works quite nicely.  Although God doesn’t change, we do.  All the time.  It’s not even years between changes in us.  One good or bad event can mean drastic changes is us.  In how we view God.

Conclusion – The psychology of the seven letters to the seven churches

Revelation is my favorite book in the Bible.  It’s such a great study of human behavior – how so many of us have this incredible knack to miss what should be obvious.  But it’s also a book full of hope.  Revelation was written by John – some years after Jesus returned to Heaven – on the island of Patmos.  It’s a beautiful island – and the view is awesome from the top – although absolutely nothing can be seen from inside the cave.  And it is a tiny little cave.  I was there many years ago – and I have to say it’s really cool to actually be at the place where my favorite book was given to John by the angel of God.

So there it is – how the psychology of the seven letters will be used to study the letter to each church.  Before we do that though, as I said, we’ll look at the Parable of the Sower.  That’ll take us through how the graph helps us understand what’s going on.  But also it gives a chance to see how we, Christians and non-Christians, are the ones that change – not God.

Hope to “see” you in part two, The Psychology of the Parable of the Sower