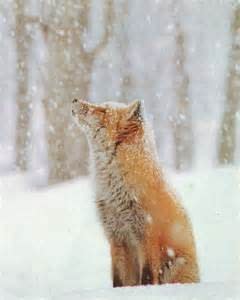 Why do you stand here looking into the sky?

If you’re a fox in the snow – you’re looking for clear sky.

If you’re a Christian – this question is for you.

Actually – this question  was  for you.

It was asked a couple thousand years ago.
And it’s still as valid now as it was then.

It came as part of this scene –

Ac 1:1 In my former book, Theophilus, I wrote about all that Jesus began to do and to teach 2 until the day he was taken up to heaven, after giving instructions through the Holy Spirit to the apostles he had chosen. 3 After his suffering, he showed himself to these men and gave many convincing proofs that he was alive. He appeared to them over a period of forty days and spoke about the kingdom of God. 4 On one occasion, while he was eating with them, he gave them this command: “Do not leave Jerusalem, but wait for the gift my Father promised, which you have heard me speak about. 5 For John baptized with water, but in a few days you will be baptized with the Holy Spirit.”
Ac 1:6 So when they met together, they asked him, “Lord, are you at this time going to restore the kingdom to Israel?”
Ac 1:7 He said to them: “It is not for you to know the times or dates the Father has set by his own authority. 8 But you will receive power when the Holy Spirit comes on you; and you will be my witnesses in Jerusalem, and in all Judea and Samaria, and to the ends of the earth.”
Ac 1:9 After he said this, he was taken up before their very eyes, and a cloud hid him from their sight.
Ac 1:10 They were looking intently up into the sky as he was going, when suddenly two men dressed in white stood beside them. 11 “Men of Galilee,” they said, “why do you stand here looking into the sky? This same Jesus, who has been taken from you into heaven, will come back in the same way you have seen him go into heaven.”

“why do you stand here looking into the sky?”

At the time, Jesus told His disciples to wait in Jerusalem.  But they weren’t waiting for Him to return.  They were waiting for the Holy Spirit.  So they were to wait for something to happen – and then they were to get out and do what they had already been told would be their task.

Maybe the verses above aren’t familiar to you.  I read a while back that many Christians don’t read the Old Testament at all.  Further – that many only read the Gospels.  (If that’s you – then you’ve never read Acts – and won’t recognize the above quote at all.)  Worse still – apparently there are too many that only read the red text in the Gospels – the words of Jesus.  If that’s you – then here’s another quote that you should recognize –

Mt 28:18 Then Jesus came to them and said, “All authority in heaven and on earth has been given to me. 19 Therefore go and make disciples of all nations, baptizing them in the name of the Father and of the Son and of the Holy Spirit, 20 and teaching them to obey everything I have commanded you. And surely I am with you always, to the very end of the age.”

If you’re still staring up at the sky (metaphorically speaking) – stop!  Jesus will come back.  But in the mean time, we have work to do.  Work that we should really want to do.  For the group of eleven that were gathered 2,000 years ago – it was all new.  They didn’t really know yet how to proceed.  So God gave them a bit of a push.  We shouldn’t need that.  Because we already know how to proceed.  It’s in “The Book”.  The Bible.  Spreading the Word to everyone should be something that we just want to do – because we love Jesus – and because of Him, we care about all of God’s children.

If you’re one of those who haven’t read the Old Testament – or who only reads the Gospels – or only part of the Gospels – I’d like to point you to a series I just completed.  It takes a fantasy / sci-fi  historical / futuristic look at the present, to see how we got to where we are today – and why each of us spreading the Word of Jesus to others is so important.  The series is On This Rock.  (At the moment, it’s being moved over here from my previous site.)  It’s based on these verses from Matthew 16 –

Mt 16:17 Jesus replied, “Blessed are you, Simon son of Jonah, for this was not revealed to you by man, but by my Father in heaven. 18 And I tell you that you are Peter, and on this rock I will build my church, and the gates of Hades will not overcome it.”

If you’re into video games, virtual reality, fantasy internet multiplayer games, Etc. – and have a hard time reading the Bible – this may be for you.  The story is about the Ancient One called Father – the Promised One – and the Prince of the earth.  It tells how our role in this universe-wide battle came to be – and why it’s so important for us to play our roles.  It warns of the dangers.  And tells of the rewards.  It tells how, if we choose to participate, will be the most exciting, dangerous, and rewarding thing we will ever do.

If that sounds like an interesting way to get started (not and end to itself – but a starting point) learning more about this battle between good and evil that we’re all involved in – it’s right here –  On This Rock.