Would we be better off if people were like robots?

“I want you to think about the damage that has been done to mankind because of the choices of men and women. Think of the suffering, the anguish, the loss. All of it, throughout human history. Wars waged throughout the ages, using ever-escalating weaponry that is crafted to bring about newer and more efficient ways of killing the enemy. The horrors and atrocities of Hitler’s concentration camps. Barbarism. Pornography and the sex trade. Slavery. Organized crime. Genocide. The list goes on. “Think about these things, and ask yourself . . . Wouldn’t the world be better off if humanity lacked free will? If people did not have the ability to choose their actions for themselves, but were forced to behave as they should?” [1]from “Merciless (Dominion Trilogy Book #3)” by Robin Parrish

Would the world be better off if humanity lacked free will? 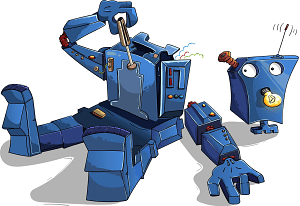 And when you read the quote – no context – and no picture like the one at the top – it even could have some appeal to you.

I have to say, if we didn’t have free will, I don’t think we’d be people.  For those of you that think our lives already lack free will because everything is predestined – we’ll get to that in a while.

I feel like the easiest way to portray a “being” with no free will would be to use a robot, instead of a human.  So for the moment, let’s pretend “humanity” is a bunch of robots – pre-programmed to do whatever it is that we’re pre-programmed to do.  No free will.  Still the human form – not actually the image at the top.  And yet, behaviorally, just like that robot,

However, there are major problems with question – and if it were to be true.

The first problem is that the question would be unanswerable if we were all pre-programmed.

The second problem falls out from the first one.

We are totally at the mercy of, for lack of a better term, our programmer.  Let’s not use creator, since that taints the discussion for some – although it wouldn’t if we had no free will.  Think about that one for a minute!

There’s an inherent assumption in the quote at the top which says the programmer would make us “good”, or at least “better” than we currently are.  Again, that’s a value judgement that we would be unable to make.  But what if the programmer made us in the image of the robot at the top of this page?  While some would say that’s what we already are – I suspect most would say that’s definitely a step backwards.  Remember – every one of us would be like that robot.  Carrying weapons that I’m sure our programmer intends for us to use 0 otherwise, why carry them all the time?

Continuing from #2, let’s say the programmer wants “good” robots – and they all do the same “good” things.  The guns are apparently just for show – maybe a deterrent, as we people would call it.  None-the-less, they are all the same and always do all the same things.  If we had free will, we would certainly call that boring.  But if we didn’t have free will – we’d be “happy”, because that’s all we knew.

But – is the world a better place?

Given the problems of “bad” and “good” robotic people – our programmer decides to mix things up a bit.  Put in a randomizing routine so they aren’t all the same.  They are now – in a word – unpredictable.  They react based on a random number their brains generate.  No rhyme or reason – just a number.

It was kind of fun dreaming up some scenarios.  But here’s a real one that demonstrates the problem –

This is from an article on msn.com called Is the End Near for Fast-Food Workers? (Sorry, the original article is no longer there.)

Wendy’s (WEN) has become the latest fast-food chain to partially replace its order-taking employees with a digital alternative. The company plans to add self-ordering kiosks at 1,000 locations by the end of the year, and executives noted during an analyst/investor day earlier this month that one benefit will be reducing labor costs.

These are real robots OK – kiosks), replacing real people.
These robots won’t procreate and therefore won’t have to pay for children.  Or spouses.  Or houses,
Or maybe most ironically, they won’t have to buy / pay for food.

These are people, probably a small number of them, looking to totally shake-up the lives of other people who work for them (for a while) – and for the ones who will never have the opportunity to work for them.  People who may have spouses and kids – and certainly pay for housing and food.

Kiosks have many advantages over humans. Kiosks don’t call in sick, require breaks, or mishear an order. They also can’t be rude to customers, steal from the register, or intentionally screw up the order of a rude customer. Most importantly, though digital ordering technology requires an up-front investment, kiosks, smartphones, and other non-human ordering stations don’t get paid hourly wages.

None of those negative things are true of all people.
But the killer is the hourly wage thing.

What if CEO’s were replaced by robots (or kiosks) – because robots could be more “humane”?

The problem isn’t whether or not the world would be better off with people that din’t have free will.

No – the problem is people, while they could be, aren’t like this –

The Parable of the Good Samaritan

Lk 10:25 On one occasion an expert in the law stood up to test Jesus. “Teacher,” he asked, “what must I do to inherit eternal life?”
Lk 10:26 “What is written in the Law?” he replied. “How do you read it?”
Lk 10:27 He answered: “ ‘Love the Lord your God with all your heart and with all your soul and with all your strength and with all your mind’; and, ‘Love your neighbor as yourself.’’”
Lk 10:28 “You have answered correctly,” Jesus replied. “Do this and you will live.”
Lk 10:29 But he wanted to justify himself, so he asked Jesus, “And who is my neighbor?”
Lk 10:30 In reply Jesus said: “A man was going down from Jerusalem to Jericho, when he fell into the hands of robbers. They stripped him of his clothes, beat him and went away, leaving him half dead. 31 A priest happened to be going down the same road, and when he saw the man, he passed by on the other side. 32 So too, a Levite, when he came to the place and saw him, passed by on the other side. 33 But a Samaritan, as he traveled, came where the man was; and when he saw him, he took pity on him. 34 He went to him and bandaged his wounds, pouring on oil and wine. Then he put the man on his own donkey, took him to an inn and took care of him. 35 The next day he took out two silver coins and gave them to the innkeeper. ‘Look after him,’ he said, ‘and when I return, I will reimburse you for any extra expense you may have.’
Lk 10:36 “Which of these three do you think was a neighbor to the man who fell into the hands of robbers?”
Lk 10:37 The expert in the law replied, “The one who had mercy on him.”
Jesus told him, “Go and do likewise.”

In some cases, there may be “real” opportunities to do things with robot that people could never do.  But when we replace people with robots just to make more money – that’s not doing likewise.

Or is that the wrong question?

But beyond all of that – thinking the world would be better if we didn’t have the free will that God created us with is actually giving up on both people and God.

I can’t help but wonder if the people who ask this question realize what they’re asking for?
If people were created without free will – the very free will used to ask that question wouldn’t even exist,
so the question could never be asked.

God create us with free will for a reason.
I believe the biggest one is so we could choose to love Him.
But there are a lot of other opportunities to show love for both God and our fellow people.
Ones like actually treats our neighbors the way would would treat ourselves.

Image by Dmitry Abramov from Pixabay

The quote and details on the book are available at amazon.com –> //amzn.to/2aZHUMc