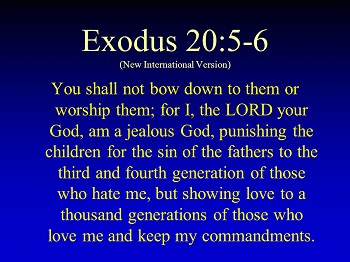 “When God gave the second commandment, which forbade idolatry, He added this warning: “I, the Lord your God, am a jealous God, visiting the iniquity of the fathers upon the children to the third and fourth generations of those who hate Me” (Exodus 20:5).   [1]John MacArthur, The Truth War: Fighting for Certainty in an Age of Deception is unavailable, but you can change that!

That sounds so cruel, doesn’t it?  Why would a good God punish innocent, and even unborn, children for the sins of their parents?

In case a refresher is needed, here’s where that comes from – the beginning of the ten commandments –

God wants us to treat Him with the respect and reverence He deserves from us,  No question about that.
But still – punishing the children, even to unborn generations?

Please note – depending on what denomination you are, the numbering of the commandments might be different.  The numbering isn’t what’s important for this article.  However, if you’d like to see more about that, please see The main thing – and the Ten Commandments.

Is this for real – 5 generations of punishment?

Is this really true – God will punish children three or four generations after the parents?  A total of up to five generations will pay for the sins of one generation?

Or is there something missing here?

As John MacArthur points out in the very next sentence – there’s something very important missing.

The thing is – I left out the next sentence to illustrate something.  Many people are aware of the passage above, and many / most of them also know the part about “I, the Lord your God, am a jealous God, visiting the iniquity of the fathers upon the children to the third and fourth generations”.  Even many non-Christians that don’t know the rest of the passage have heard about this part.  Many / most of those who remember it probably have forgotten this part – “of those who hate Me”.

With that phrase, even this part might seem a little less cruel.  At least for a generation or two.

Nature or Nurture has long been something we wonder about when trying to figure how how people came to be the way they are.  For any one of us, were we born the way we are today – or did our environment make us the way we are?  Maybe some of both?

On the nurture side – many kids grow up emulating their parents.  Unfortunately, that includes the bad things – spouse abuse, alcohol / drug abuse, child abuse, Etc.  In that regard, we know that this type of observed behavior can be learned by the child – from the parent – essentially handed down to the next generation.  And – the punishment with it.

Here now, is the next sentence from the book –

Scripture elsewhere makes it clear that children are never directly punished for the guilt of their fathers’ sins (Deuteronomy 24:16; Ezekiel 18:19–32), but the natural consequences of those sins do indeed pass from generation to generation. Children learn from their fathers’ examples and imitate what they see. One generation’s teaching establishes a spiritual legacy that succeeding generations inherit. If today’s “fathers” abandon the truth, it will take generations to recover.”  [2]John MacArthur, The Truth War: Fighting for Certainty in an Age of Deception is unavailable, but you can change that!

Then, if it is indeed the sin that is handed down by the parent, is it not also true that the punishment is handed down from one generation to the next only because the child continues to hate God?

Now, let’s look at the scripture references from the book –

What does this mean, especially in relation to the earlier passage from Exodus?

This is from a section the NIV calls Miscellaneous Laws.  But it has to do with laws for people to follow in regards to other people.  This is not about how God will treat people.

To complicate things a bit, let’s add another passage, a but earlier in time – from Exodus.  This takes place after the first stone tablets with the Ten Commandments were given to Moses (Exodus 24:12 thru Exodus 31:18) – after the golden calf incident (Exodus 32:1-14) – and after Moses broke the first tablets (Exodus 32:15-21).

Ex 34:1 The LORD said to Moses, “Chisel out two stone tablets like the first ones, and I will write on them the words that were on the first tablets, which you broke. 2 Be ready in the morning, and then come up on Mount Sinai. Present yourself to me there on top of the mountain. 3 No one is to come with you or be seen anywhere on the mountain; not even the flocks and herds may graze in front of the mountain.”
Ex 34:4 So Moses chiseled out two stone tablets like the first ones and went up Mount Sinai early in the morning, as the LORD had commanded him; and he carried the two stone tablets in his hands. 5 Then the LORD came down in the cloud and stood there with him and proclaimed his name, the LORD. 6 And he passed in front of Moses, proclaiming, “The LORD, the LORD, the compassionate and gracious God, slow to anger, abounding in love and faithfulness, 7 maintaining love to thousands, and forgiving wickedness, rebellion and sin. Yet he does not leave the guilty unpunished; he punishes the children and their children for the sin of the fathers to the third and fourth generation.”

There are those words again, in verse 7 –

Yet he does not leave the guilty unpunished; he punishes the children and their children for the sin of the fathers to the third and fourth generation.

But then look what Moses says next –

Ex 34:8 Moses bowed to the ground at once and worshiped. 9 “O Lord, if I have found favor in your eyes,” he said, “then let the Lord go with us. Although this is a stiff-necked people, forgive our wickedness and our sin, and take us as your inheritance.”

After all that, and also knowing what’s going to come in the future – look at how God responds –

Immediately after telling Moses that He will punish children to the third and fourth generation of those who hate him (and worshiping a golden calf falls into the just defined category of hating Him) – look what God does!

Having said that, it still comes with a warning.  And for those familiar with the Exodus – the people violated these warnings many times.  And God already knew they were going to do this.  And yet, He still did what we just read.

Let’s move to the next passage, this time from Ezekiel –

Eze 18:19 “Yet you ask, ‘Why does the son not share the guilt of his father?’ Since the son has done what is just and right and has been careful to keep all my decrees, he will surely live. 20 The soul who sins is the one who will die. The son will not share the guilt of the father, nor will the father share the guilt of the son. The righteousness of the righteous man will be credited to him, and the wickedness of the wicked will be charged against him.
Eze 18:21 “But if a wicked man turns away from all the sins he has committed and keeps all my decrees and does what is just and right, he will surely live; he will not die. 22 None of the offenses he has committed will be remembered against him. Because of the righteous things he has done, he will live. 23 Do I take any pleasure in the death of the wicked? declares the Sovereign LORD. Rather, am I not pleased when they turn from their ways and live?
Eze 18:24 “But if a righteous man turns from his righteousness and commits sin and does the same detestable things the wicked man does, will he live? None of the righteous things he has done will be remembered. Because of the unfaithfulness he is guilty of and because of the sins he has committed, he will die.

Again, we return to the thought of the son not sharing in the guilt of the father.  This time, we also see God saying that He would rather have someone turn away from their sins and live than to stay in them and die.

This is God’s response to the people claiming God’s own ways are unjust.  He turns it around and asks the people if it’s not their ways that are unjust.

Eze 18:30 “Therefore, O house of Israel, I will judge you, each one according to his ways, declares the Sovereign LORD. Repent! Turn away from all your offenses; then sin will not be your downfall. 31 Rid yourselves of all the offenses you have committed, and get a new heart and a new spirit. Why will you die, O house of Israel? 32 For I take no pleasure in the death of anyone, declares the Sovereign LORD. Repent and live!”

Again, God says he takes no pleasure in the death of anyone.  He would rather have them change their ways.  The principle here is one of being just.  As much as God wants to forgive – justice must still be served.

While some commentaries look at this passage and talk about Jesus’ death on the cross and the forgiveness of our sins when we believe in Jesus as proof that the passage is true – I can’t help but wonder why it’s not the other way around.  Why is this passage not considered as telling the people how God wants it to be – and that the day is coming when Jesus will be the one to pay the price of justice for all of us?

After all – What we saw here was that Moses understood something the Jewish leaders, even in Jesus’ time, didn’t understand –

Mt 9:12 On hearing this, Jesus said, “It is not the healthy who need a doctor, but the sick. 13 But go and learn what this means: ‘I desire mercy, not sacrifice.’ For I have not come to call the righteous, but sinners.”

The thing about this is that, as you may have noticed, I desire mercy, not sacrifice, isn’t something that Jesus said that had never been said before.  No.  That’s a quote from an Old Testament book –

Hos 6:6 For I desire mercy, not sacrifice,
and acknowledgment of God rather than burnt offerings.

Oops.  And Hosea was all about God letting the people know they had already totally missed the point.  That same point that Moses understood.  Remember – right after God spoke about punishing the sins of the father to the third and fourth generation, Moses asked for forgiveness – and it was given.  Long before Jesus came to earth and died to pay the price of justice for those who would accept it.

What we see is that people tend to do exactly what I did at the top of this article – I left something out.
But while I left it out intentionally, to make a point – we often forget / ignore things without conscious thought.

God has delivered the whole message.

Ever since God first said that, we’ve seemingly chosen to ignore / forget / misunderstand God’s message to us.  And – as was pointed out in Hosea, we claim God is the one with the problem.  We call God cruel.  But all the while – it’s us with the problem.

image from keywordsuggest.org  (sorry, the link is no longer available)