One of many problems with arrogance is never getting to know anyone who really is better. 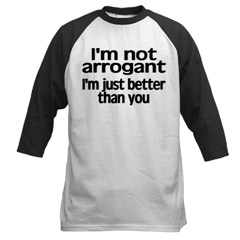 Let me give you a really simple example.

When I was in college, I wanted to learn how to play racquetball.  We had courts on campus.  I needed exercise.  But I didn’t know anyone else who played.  So I just started practicing by myself.
One day this guy knocks on the door – and asks if I’d like to play a set with him.
I got destroyed.  Not surprising, since I’d never played another person – never played at real game speed.  And, he was good.  Well – at least way better than me.

We started playing two or three times a week.  Slowly, I got better.  It got to be more and more of a contest.  It was fun – getting better and better – because I was playing against someone better than me.

Then – one day I actually won.

If he wasn’t better than me, then he didn’t want to play.
And so both of us lost the chance to improve together.

Oddly enough – that left him with the knowledge that, in fact, he wasn’t better.  At least not anymore.

In that case, arrogance actually left him knowing that he wasn’t better than me.

How to avoid that problem – insisting on being “the best” – without the feeling of losing when you find out your not the best?

Refuse to play the game.
Just wear the shirt above – and refuse to even acknowledge that maybe someone else is better – blindly insist that you are #1 – no matter the mountain of evidence to the contrary.

Here’s the ultimate example of that –

When we examine the extraordinary factors that combine together in the most remarkable manner to allow both the Universe and the glory of Creation—humanity—to exist and flourish, we stand in awe as we contemplate the beautiful and marvelous creation that it is our privilege to live in.

You may have noticed – there are two ways to look at that statement.

The problem with item two – looking just at us, and ignoring the One who created everything, including us – is that we have a skewed view of something like this as well –

The arrogant person would say – wow, I got to name all the animals.  Aren’t I awesome?

Someone else would say something along the line of what we see from David, in Psalm 8 –

Ps 8:1 O LORD, our Lord,
how majestic is your name in all the earth!

You have set your glory
above the heavens.
Ps 8:2 From the lips of children and infants
you have ordained praise
because of your enemies,
to silence the foe and the avenger.

Ps 8:3 When I consider your heavens,
the work of your fingers,
the moon and the stars,
which you have set in place,
Ps 8:4 what is man that you are mindful of him,
the son of man that you care for him?
Ps 8:5 You made him a little lower than the heavenly beings
and crowned him with glory and honor.

Ps 8:6 You made him ruler over the works of your hands;
you put everything under his feet:
Ps 8:7 all flocks and herds,
and the beasts of the field,
Ps 8:8 the birds of the air,
and the fish of the sea,
all that swim the paths of the seas.

Ps 8:9 O LORD, our Lord,
how majestic is your name in all the earth!

David acknowledges that God is the awesome One.  He was the creator of this amazing world that we live in – and of the universe that we see around us – and of Heaven that we can’t even see.

And yet – for whatever reason – God looks at us as special.

I ask you – who places the importance of people on a higher level – David or the arrogant person?

I submit to you – the answer is David.

Arrogance is defined as an offensive display of superiority or self-importance; overbearing pride.
Key words there are obviously offensive and pride.  But let’s not forget about self-importance.

And there’s the key.  The point of reference as to the importance of “us”.

When we claim we are important – that’s from our own point of view.  Not really saying all that much – no matter how great we are.

And so – the arrogant person actually makes themselves lower than they could have been had they acknowledged God – and accepted His view of us.

Pr 11:2 When pride comes, then comes disgrace,
but with humility comes wisdom.

Pr 16:18 Pride goes before destruction,
a haughty spirit before a fall.

Pr 29:23 A man’s pride brings him low,
but a man of lowly spirit gains honor.

And then we have Paul’s first letter to the Corinthians –

1Co 1:26 Brothers, think of what you were when you were called. Not many of you were wise by human standards; not many were influential; not many were of noble birth. 27 But God chose the foolish things of the world to shame the wise; God chose the weak things of the world to shame the strong. 28 He chose the lowly things of this world and the despised things—and the things that are not—to nullify the things that are, 29 so that no one may boast before him. 30 It is because of him that you are in Christ Jesus, who has become for us wisdom from God—that is, our righteousness, holiness and redemption. 31 Therefore, as it is written: “Let him who boasts boast in the Lord.”

So – feeling arrogant?
Or would you rather acknowledge our place in creation?

Want to be stuck “as good as you are now” – and never get better?
Or spend an eternity in Heaven – learning from the Creator of everything?

I have no pretensions that I could ever be last – and therefore be first. It’s not something I’d even think about.  I know I’m not capable.
I just pray that I no longer try so hard to be first – and thereby end up last.