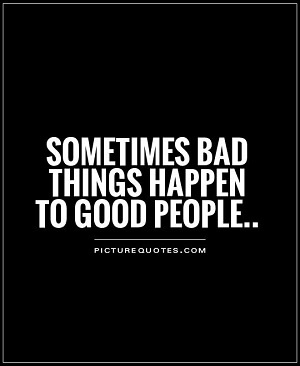 Why do bad things happen to good people?

I know this is a question that gets asked a lot.

Especially when bad things happen to people that someone thinks are good.
Maybe someone else thinks the victim is good.
Maybe the victims themselves think they are good.

How often has this ever happened?

How often has a good person had something bad happen to them?

And for some reason that most people probably couldn’t explain – we call that thing “good”.

Know who that was?

Mk 10:17 As Jesus started on his way, a man ran up to him and fell on his knees before him. “Good teacher,” he asked, “what must I do to inherit eternal life?”
Mk 10:18 “Why do you call me good?” Jesus answered. “No one is good—except God alone. 19 You know the commandments: ‘Do not murder, do not commit adultery, do not steal, do not give false testimony, do not defraud, honor your father and mother.’’”
Mk 10:20 “Teacher,” he declared, “all these I have kept since I was a boy.”
Mk 10:21 Jesus looked at him and loved him. “One thing you lack,” he said. “Go, sell everything you have and give to the poor, and you will have treasure in heaven. Then come, follow me.”
Mk 10:22 At this the man’s face fell. He went away sad, because he had great wealth.
Mk 10:23 Jesus looked around and said to his disciples, “How hard it is for the rich to enter the kingdom of God!”
Mk 10:24 The disciples were amazed at his words. But Jesus said again, “Children, how hard it is to enter the kingdom of God! 25 It is easier for a camel to go through the eye of a needle than for a rich man to enter the kingdom of God.”
Mk 10:26 The disciples were even more amazed, and said to each other, “Who then can be saved?”
Mk 10:27 Jesus looked at them and said, “With man this is impossible, but not with God; all things are possible with God.”
Mk 10:28 Peter said to him, “We have left everything to follow you!”
Mk 10:29 “I tell you the truth,” Jesus replied, “no one who has left home or brothers or sisters or mother or father or children or fields for me and the gospel 30 will fail to receive a hundred times as much in this present age (homes, brothers, sisters, mothers, children and fields—and with them, persecutions) and in the age to come, eternal life. 31 But many who are first will be last, and the last first.”

and the bad thing that happened:

Lk 23:26 As they led him away, they seized Simon from Cyrene, who was on his way in from the country, and put the cross on him and made him carry it behind Jesus. 27 A large number of people followed him, including women who mourned and wailed for him. 28 Jesus turned and said to them, “Daughters of Jerusalem, do not weep for me; weep for yourselves and for your children. 29 For the time will come when you will say, ‘Blessed are the barren women, the wombs that never bore and the breasts that never nursed!’ 30 Then
“ ‘they will say to the mountains, “Fall on us!”
and to the hills, “Cover us!” ’ 31 For if men do these things when the tree is green, what will happen when it is dry?”
Lk 23:32 Two other men, both criminals, were also led out with him to be executed. 33 When they came to the place called the Skull, there they crucified him, along with the criminals—one on his right, the other on his left. 34 Jesus said, “Father, forgive them, for they do not know what they are doing.” And they divided up his clothes by casting lots.
Lk 23:35 The people stood watching, and the rulers even sneered at him. They said, “He saved others; let him save himself if he is the Christ of God, the Chosen One.”
Lk 23:36 The soldiers also came up and mocked him. They offered him wine vinegar 37 and said, “If you are the king of the Jews, save yourself.”
Lk 23:38 There was a written notice above him, which read: THIS IS THE KING OF THE JEWS.
Lk 23:39 One of the criminals who hung there hurled insults at him: “Aren’t you the Christ? Save yourself and us!”
Lk 23:40 But the other criminal rebuked him. “Don’t you fear God,” he said, “since you are under the same sentence? 41 We are punished justly, for we are getting what our deeds deserve. But this man has done nothing wrong.”
Lk 23:42 Then he said, “Jesus, remember me when you come into your kingdom.’”
Lk 23:43 Jesus answered him, “I tell you the truth, today you will be with me in paradise.”

I thought of this while I was working on moving a couple things over here from my old site.
They were, of course, about bad things that were happening to me.

I had a hard time with the title on this one. It was tempting to call it “when bad things happen to good people” –
but that presupposes I’m “good people”. I prefer to leave that to God. I have a much better chance of coming out “good” …

I’m kind of happy to see that even back in December of 2011 – at least I had the sense to not try to claim I was good.

Those other articles I mentioned are coming.
If you’d like to receive an email when they get here, please “follow” this site using one of the links at the top / right side of this page.