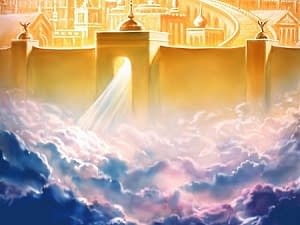 Do we realize the full implication of these words?  We pray for God’s Kingdom to come.  But do we live like it?

Mt 6:10 thy kingdom come,
thy will be done
on earth as it is in heaven.

We want earth to be like God’s Kingdom.  Of course.  Do we really?

Your Kingdom Come ... on earth ... is article #5 in the series: The Lord's Prayer. Click button to view titles for entire series

In this post, we’ll look specifically at part of Matthew 6:10.  God’s will is going to be discussed in Part 5.  For now, we’ll just look at praying for God’s Kingdom to be on earth.

So now – given the words of Verse 10,
what about these words from Jesus?

These verses are from what’s known as The Great Commission.  Jesus’ words to the remaining eleven disciples after His death and resurrection.  Words also intended for us today.

And what do these verses have to do with each other?

Rev 21:1 Then I saw a new heaven and a new earth, for the first heaven and the first earth had passed away, and there was no longer any sea. 2 I saw the Holy City, the new Jerusalem, coming down out of heaven from God, prepared as a bride beautifully dressed for her husband. 3 And I heard a loud voice from the throne saying, “Now the dwelling of God is with men, and he will live with them. They will be his people, and God himself will be with them and be their God. 4 He will wipe every tear from their eyes. There will be no more death or mourning or crying or pain, for the old order of things has passed away.”

These words are from John – in the Book or Revelation.

This – what we read in Revelation – is when God’s Kingdom will come to earth.
After the tribulation.
After all the Seals – including one that was so bad that we read –

Rev 8:1 When he opened the seventh seal, there was silence in heaven for about half an hour.

and the Trumpets – including this one –

Rev 9:13 The sixth angel sounded his trumpet, and I heard a voice coming from the horns of the golden altar that is before God. 14 It said to the sixth angel who had the trumpet, “Release the four angels who are bound at the great river Euphrates.” 15 And the four angels who had been kept ready for this very hour and day and month and year were released to kill a third of mankind. 16 The number of the mounted troops was two hundred million. I heard their number.

Rev 16:17 The seventh angel poured out his bowl into the air, and out of the temple came a loud voice from the throne, saying, “It is done!” 18 Then there came flashes of lightning, rumblings, peals of thunder and a severe earthquake. No earthquake like it has ever occurred since man has been on earth, so tremendous was the quake. 19 The great city split into three parts, and the cities of the nations collapsed. God remembered Babylon the Great and gave her the cup filled with the wine of the fury of his wrath. 20 Every island fled away and the mountains could not be found. 21 From the sky huge hailstones of about a hundred pounds each fell upon men. And they cursed God on account of the plague of hail, because the plague was so terrible.

So now – do you realize that when you pray for

Mt 6:10 Thy kingdom come,
they will be done
on earth as it is in heaven.

you are praying for all these things to happen before God’s Kingdom can / will come to earth?

Some people (maybe even many people?) think that peace can come to the earth now – as long as we have good negotiators in the middle east – and other parts of the world as well.  But there’s nothing in the Bible to indicate that there will be “peace” on earth before the event below, which we read about in Daniel 8, where the Angel Gabriel explains the meaning of a vision given to King Belshazzar –

Da 8:19 He said: “I am going to tell you what will happen later in the time of wrath, because the vision concerns the appointed time of the end. 20 The two-horned ram that you saw represents the kings of Media and Persia. 21 The shaggy goat is the king of Greece, and the large horn between his eyes is the first king. 22 The four horns that replaced the one that was broken off represent four kingdoms that will emerge from his nation but will not have the same power.

Da 8:23 “In the latter part of their reign, when rebels have become completely wicked, a stern-faced king, a master of intrigue, will arise. 24 He will become very strong, but not by his own power. He will cause astounding devastation and will succeed in whatever he does. He will destroy the mighty men and the holy people. 25 He will cause deceit to prosper, and he will consider himself superior. When they feel secure, he will destroy many and take his stand against the Prince of princes. Yet he will be destroyed, but not by human power.

Let’s look at that last verse from the NIRV –

Da 8:25 “He will tell lies in order to succeed. He will think he is more important than anyone else. When people feel safe, he will destroy many of them. He will stand up against the greatest Prince of all. Then he will be destroyed. But he will not be killed by human beings.

So the NIV says “when they feel secure” in verse 25.
The NIRV says “When people feel safe” in that same verse.

Going back to the original Hebrew, one sees that those entire phrases are actually one word –

Whether it’s actually peace, prosperity, quietness or abundance may not really matter.  People today somehow look at all the turbulence in the world and think all of it can be solved by providing jobs – even to people with the most extreme religious or political views.  Jobs will lead to abundance and prosperity – and peace will somehow be the result.

And so we have had political leaders all trying to negotiate peace all around the world – with the almost “holy grail” location being the middle east.  Get peace there – and everything will be good.

I submit – get peace there – and we’re one more step closer to being in the Daniel 8 scenario.

Ironically, those who are doing this to achieve world peace are, in a fashion, setting up the likelihood of exactly that.  But if anything, it would be the false “shalvah” from Daniel 8.  And if God deems that the time has come, the Revelation scenarios will indeed come – and the real peace will be forthcoming after that.  After all the other things described above.

So what does it mean?

I’d say – when we pray for God’s Kingdom to come to earth, we should also be preparing for that very event.

Sure – Jesus said it would come soon, right?
So one could wonder – will it really come?

Lk 21:8 He replied: “Watch out that you are not deceived. For many will come in my name, claiming, ‘I am he,’ and, ‘The time is near.’ Do not follow them. 9 When you hear of wars and revolutions, do not be frightened. These things must happen first, but the end will not come right away.”

Note – in this verse, Jesus said that others will way “The time is near” – and that we shouldn’t listen to them.

These words at the very end of the Bible are translated in the NIV as Jesus saying that He will return soon.

And yet – going back to the original meaning of that word translated as “soon”, we see –

And so we see that what He really said was that He would come “quickly” – “all of a sudden” – not that He would come soon.  And since His return will be right after all of those things happen – then one shouldn’t imply that the events will come soon either.  Rather – they will come quickly.

To that end, we also read –

Mk 4:26 He also said, “This is what the kingdom of God is like. A man scatters seed on the ground. 27 Night and day, whether he sleeps or gets up, the seed sprouts and grows, though he does not know how. 28 All by itself the soil produces grain—first the stalk, then the head, then the full kernel in the head. 29 As soon as the grain is ripe, he puts the sickle to it, because the harvest has come.”

So when the time comes – then As soon as the grain is ripe, he puts the sickle to it, because the harvest has come.  In other words, as soon as the time that God has determined for “The End”, then it will come quickly and suddenly.

Just in case the time is near, are you ready for this?

Just in case the time will come before you die, are you ready for this?

What if it comes after you die – but while your kids and friends are still alive?

How about your grandchildren?

At what point are you willing to say that you no longer care about people that you don’t know – but your family or extended family do know?

Assuming that you are saying the Lord’s Prayer – including

Mt 6:10 thy kingdom come,
thy will be done
on earth as it is in heaven.

Mt 28:19 “Therefore go and make disciples of all nations, baptizing them in the name of the Father and of the Son and of the Holy Spirit, 20 and teaching them to obey everything I have commanded you. And surely I am with you always, to the very end of the age.”

so that those other people we just talked about – and even others that will not be known to you or your family – may also be prepared for all the things that come with God’s Kingdom coming to earth?  BTW – the best way to be prepared is to be saved – and not have to go through them at all.  Are you doing your part for that?

If you are – I’m sure Jesus is pleased with what you are doing.