What do ancient myths and modern poetry have to do with Heaven?  More than you might think.  It’s not that they actually describe Heaven.  But there’s something about them that’s worth considering. 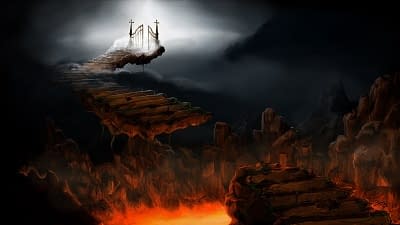 That image to the right is probably a view lots of people have about both Heaven and Hell.  For this discussion, it’s Heaven as a place in the sky.  Somewhere physically above Hell.

And there’s not much more.  Life in the clouds.

Unless we take some descriptions in the Bible literally.  Like this one:

Rev 21:9 One of the seven angels who had the seven bowls full of the seven last plagues came and said to me, “Come, I will show you the bride, the wife of the Lamb.” 10 And he carried me away in the Spirit to a mountain great and high, and showed me the Holy City, Jerusalem, coming down out of heaven from God. 11 It shone with the glory of God, and its brilliance was like that of a very precious jewel, like a jasper, clear as crystal. 12 It had a great, high wall with twelve gates, and with twelve angels at the gates. On the gates were written the names of the twelve tribes of Israel. 13 There were three gates on the east, three on the north, three on the south and three on the west. 14 The wall of the city had twelve foundations, and on them were the names of the twelve apostles of the Lamb.

Rev 21:15 The angel who talked with me had a measuring rod of gold to measure the city, its gates and its walls. 16 The city was laid out like a square, as long as it was wide. He measured the city with the rod and found it to be 12,000 stadia in length, and as wide and high as it is long. 17 He measured its wall and it was 144 cubits thick, by man’s measurement, which the angel was using. 18 The wall was made of jasper, and the city of pure gold, as pure as glass. 19 The foundations of the city walls were decorated with every kind of precious stone. The first foundation was jasper, the second sapphire, the third chalcedony, the fourth emerald, 20 the fifth sardonyx, the sixth carnelian, the seventh chrysolite, the eighth beryl, the ninth topaz, the tenth chrysoprase, the eleventh jacinth, and the twelfth amethyst. 21 The twelve gates were twelve pearls, each gate made of a single pearl. The great street of the city was of pure gold, like transparent glass.

Is this to be taken literally?  With Revelation, that’s not the norm.  It was after all, a vision of Heaven.  John did the best he could to describe what he saw, using things he knew about from his life.  But does that make it 100% accurate and correct?  Hardly.

Imagine someone from Jesus’ time trying to describe life in our time.  Surely, we’re not living in Heaven here in 2019.  But there’s no way John, or anyone else, could accurately describe even “simple” things like televisions and cell phones.  Then go to 3D IMAX theaters, immersive virtual reality, rockets going into space.  There’s just no way to describe it using  objects, words or even thoughts from 2,000 years ago.

So why are ancient myths and modern poetry even being brought up?  Surely, they don’t describe Heaven, do they?

If they do, it’s purely by accident.  Ancient myths try to tell us about the past.  In fact, they take us away from Christianity.  Again, it begs the question of why bring them up.

Poetry is about thoughts.  Thoughts on the way things are in this life.  Or maybe thoughts about the way things could be.  There’s even poetry in the Bible.  However, lots of poetry takes us away from Christianity as well.  So why bring it up?

Here’s why I bring up ancient myths and poetry in relation to Heaven:

Wisdom From the Spirit

1Co 2:6 We do, however, speak a message of wisdom among the mature, but not the wisdom of this age or of the rulers of this age, who are coming to nothing. 7 No, we speak of God’s secret wisdom, a wisdom that has been hidden and that God destined for our glory before time began. 8 None of the rulers of this age understood it, for if they had, they would not have crucified the Lord of glory. 9 However, as it is written:
“No eye has seen,
no ear has heard,
no mind has conceived
what God has prepared for those who love him”— 10 but God has revealed it to us by his Spirit.

No eye has seen Heaven.  John had a vision.  But he wasn’t really in Heaven.  Jesus is the only one who was in Heaven, and then was on earth.  But Jesus never actually described Heaven.  He told us what it was like, using parables.  But really, could He have been accurate?

Given that no mind, other than Jesus’, has ever even conceived of Heaven – how could He possibly begin to describe it to us in any accurate detail that we would understand?

And that’s why I have a title of Ancient Myths, Modern Poetry and Heaven.

When I first read the excerpt below, from C S Lewis’ Weight of Glory I was like – what’s he talking about?

“That is why we have peopled air and earth and water with gods and goddesses and nymphs and elves—that, though we cannot, yet these projections can enjoy in themselves that beauty, grace, and power of which Nature is the image. That is why the poets tell us such lovely falsehoods. They talk as if the west wind could really sweep into a human soul; but it can’t. They tell us that “beauty born of murmuring sound” will pass into a human face; but it won’t. Or not yet. For if we take the imagery of Scripture seriously, if we believe that God will one day give us the Morning Star and cause us to put on the splendour of the sun, then we may surmise that both the ancient myths and the modern poetry, so false as history, may be very near the truth as prophecy.”[1]  Lewis, C. S.. Weight of Glory (Collected Letters of C.S. Lewis) (p. 194). HarperOne. Kindle Edition.

Yes – the ancient myths are false, as relates to history.  Poetry can’t describe Heaven, because no poet has been there and come back to earth to write poetry.

The thing is though, whether it be ancient myths or poetry from any age, everything in them is something that was conceived of in someone’s mind.  And that passage in 1 Corinthians tells us that no mind has conceived of what God has planned for those who love Him – of what Heaven is like.  And it’s not like any human mind could conceive of something better than Heaven.  It’s that Heaven will be infinitely better than anything we could ever imagine.

Of course, we need to keep it Biblical.  There are many, many things the human mind has conceived of that will not be in Heaven.

However, even the most beautiful, the most loving, the most creative things any of our minds have ever conceived of – they’re a pale imitation of what Heaven will be like.

And that’s what ancient myths and poetry can tell us about Heaven.  The best of them, in Biblical terms, is far less than what we will experience in the next life, if we choose to follow Jesus.

Because Heaven will be inconceivable.  There are no words to describe it, other than to say it’s better than anything we could ever think of.

Hope to see you there.