Will there be cheese in Heaven?  Maybe you don’t care.  I do.  I’d like to see smoked salmon too.  But here’s the thing.  Cholesterol is becoming a problem for me.  And the number one factor is cheese.  Almost everything is better with cheese.  And the more cheese, the better it is.  Even cheese alone is good.  So when I ask, will there be cheese in Heaven – it’s a serious question. 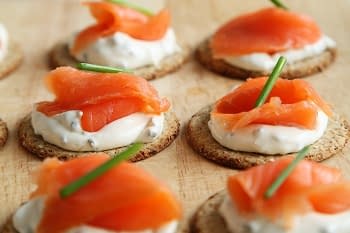 For you, maybe it’s butter.  Or bacon.  Or something else.  Whatever’s important to you – you might be asking, will there be [fill in the blank] in Heaven.  Of course, it might be something we know isn’t going to be there.  Like drugs, unlimited alcohol, Etc.  It’s like – don’t even go there.  But remember when Jesus said this:

Mt 15:10 Jesus called the crowd to him and said, “Listen and understand. 11 What goes into a man’s mouth does not make him ‘unclean,’ but what comes out of his mouth, that is what makes him ‘unclean.’ ”

We’ll get into the context in a moment.  But on its face, this seems to imply that food, in and of itself, doesn’t make us “unclean”, so from a spiritual point of view cheese and even bacon aren’t bad.

Jesus Appears to the Disciples

Lk 24:36 While they were still talking about this, Jesus himself stood among them and said to them, “Peace be with you.”

Lk 24:37 They were startled and frightened, thinking they saw a ghost. 38 He said to them, “Why are you troubled, and why do doubts rise in your minds? 39 Look at my hands and my feet. It is I myself! Touch me and see; a ghost does not have flesh and bones, as you see I have.”

Lk 24:40 When he had said this, he showed them his hands and feet. 41 And while they still did not believe it because of joy and amazement, he asked them, “Do you have anything here to eat?” 42 They gave him a piece of broiled fish, 43 and he took it and ate it in their presence.

Lk 24:44 He said to them, “This is what I told you while I was still with you: Everything must be fulfilled that is written about me in the Law of Moses, the Prophets and the Psalms.”

Lk 24:45 Then he opened their minds so they could understand the Scriptures. 46 He told them, “This is what is written: The Christ will suffer and rise from the dead on the third day, 47 and repentance and forgiveness of sins will be preached in his name to all nations, beginning at Jerusalem. 48 You are witnesses of these things. 49 I am going to send you what my Father has promised; but stay in the city until you have been clothed with power from on high.”

Did you notice what’s going on here?  Just what happened in this passage is amazing, but let’s back up a bit.  Luke includes four passages before this one that set the scene for us.

The second is Jesus’ burial.  Since the Sabbath was about to begin, Jesus had to be buried right away.  His body was prepared according to Jewish customs and was laid in the tomb.  See Luke 23:50-56.

The third is Jesus’ resurrection.  Some of the women went to the tomb, and discovered that Jesus was not there.  The angels reminded them about what Jesus had said – ‘The Son of Man must be delivered into the hands of sinful men, be crucified and on the third day be raised again’.  See Luke 24:1-12.

The fourth is On the Road to Emmaus.  Jesus appeared to two men, but they didn’t realize it was Him because they were kept from recognizing Him.  They were walking and talking for some distance.  See Luke 24:13-35.

So the backdrop is that Jesus died, was buried, and resurrected.  He also appeared to at least two men.  Finally, we get to the passage above, where Jesus appears to the eleven remaining disciples.  Here, Jesus proves to them that it’s really Him.  He reminds them of some of the things He said while He was still alive.  Finally, Jesus opens up their minds – they don’t yet have the Holy Spirit – so they can really understand the Scriptures and how they relate to what He’s been telling them.

And in the middle of that heavy conversation, Jesus says – “Do you have anything here to eat?”

And in the middle of what we’d think is super important – Jesus asked if they have any food!

The thing here is that Jesus, as we saw, died and now has His resurrection body.  And he wants to eat something.  That gives us every expectation that we also, after we are resurrected, will be eating food.  The same kind of food we eat and hopefully enjoy now.

Will there be cheese in Heaven?

But before we get too excited about the possibilities, let’s revisit the original quote.  The one about clean and unclean food.  Although there does seem to be a pretty high correlation for some of us between unclean foods and the ones we like the best – like shellfish and pork – does the passage in the Bible tell us anything about what we might have available in Heaven?

Let’s look at it in full context and find out.

Mt 15:1 Then some Pharisees and teachers of the law came to Jesus from Jerusalem and asked, 2 “Why do your disciples break the tradition of the elders? They don’t wash their hands before they eat!”

Mt 15:3 Jesus replied, “And why do you break the command of God for the sake of your tradition? 4 For God said, ‘Honor your father and mother’ and ‘Anyone who curses his father or mother must be put to death.’ 5 But you say that if a man says to his father or mother, ‘Whatever help you might otherwise have received from me is a gift devoted to God,’ 6 he is not to ‘honor his father’’ with it. Thus you nullify the word of God for the sake of your tradition. 7 You hypocrites! Isaiah was right when he prophesied about you:

Mt 15:8 “ ‘These people honor me with their lips,
but their hearts are far from me.

Mt 15:9 They worship me in vain;
their teachings are but rules taught by men.’”

So far – nothing about food at all.  It’s coming.  But since the first part of this passage has nothing to do with food, we need to be careful about any conclusions drawn from it.  This beginning, which generally lays out the main points of the passage, is about words and what’s in a person’s heart.

Mt 15:10 Jesus called the crowd to him and said, “Listen and understand. 11 What goes into a man’s mouth does not make him ‘unclean,’ but what comes out of his mouth, that is what makes him ‘unclean.’ ”

Now we see – food is being used as a contrast to words.  Jesus is making a distinction between the Old Testament usage of “clean” to identify foods that were OK to eat – versus words that are an indication of a heart that’s “unclean”.  A heart that isn’t following God.

Mt 15:12 Then the disciples came to him and asked, “Do you know that the Pharisees were offended when they heard this?”

Mt 15:13 He replied, “Every plant that my heavenly Father has not planted will be pulled up by the roots. 14 Leave them; they are blind guides. If a blind man leads a blind man, both will fall into a pit.”

Jesus tells a parable, but the disciples didn’t understand.

Mt 15:16 “Are you still so dull?” Jesus asked them. 17 “Don’t you see that whatever enters the mouth goes into the stomach and then out of the body? 18 But the things that come out of the mouth come from the heart, and these make a man ‘unclean.’ 19 For out of the heart come evil thoughts, murder, adultery, sexual immorality, theft, false testimony, slander. 20 These are what make a man ‘unclean’; but eating with unwashed hands does not make him ‘unclean.’ ”

So – if this passage has nothing to do with what we might be eating in Heaven, why did I include it?  Especially, why did I lead off with it?

Well – it’s to show the importance of not pulling a verse or two out of context, and then drawing conclusions from it.  Context is essential.  So is knowing the culture of the time and the rich meanings of words at the time.  We cannot really understand what the Bible is trying to tell us unless we consider all of these things – context, culture (both theirs and how it relates to ours), and the meaning behind words (understanding what they meant at the time and then putting that in terms that we can relate to today).

Still asking – Will there be cheese in Heaven?

The bottom line is – we really don’t know about food in Heaven.  Both food and water are used as symbols in the New Testament.  When they’re mentioned – maybe it’s really about food, but maybe it’s not.  Even the wedding feast (or supper) of the Lamb could be symbolic.  There’s just no way to know.  We’ll find out when we get there.

To me, the bigger question is, does it really matter?  As much as I’d like to be able to eat that smoked salmon and cheese cracker in the image at the top, is it a deal breaker for me if it’s not available in Heaven?

In the passage containing the Ten Commandments, we read this one:

No, the question should be, if that food isn’t available – is that enough for me to turn down Heaven and choose Hell instead?

And if we’re choosing Hell because there’s no cheese in Heaven, we’ve turned cheese into a god.  Even worse, we’ve put the god of cheese ahead of the God of the Bible.  And then, we won’t have to turn down Heaven – because we won’t be invited.