Do we know what the apocalypse will be like?  According to something I just read, apparently we don’t have a clue.  For all the disaster, end-of-the-world, apocalyptic movies that are out there, we just don’t know.  Not even close.  And there’s a reason for that.  Hang in there – I’ll tell you shortly. 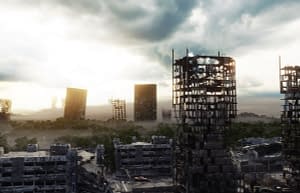 But for now, here’s what brought up the question today.  There was this article on msn.com titled These States May Face ‘Apocalyptic’ COVID-19, Says Virologist.  Sure, they put Apocalyptic in quotes.  It’s not really the end of the world.  Yet.  As far as we know.  Or as far as what we can gather from the Bible.  The preconditions for it just haven’t been met.

Back to today.  The article says:

Just a month ago, many Americans believed that the worst was over in regards to the COVID-19 pandemic. However, over the last few weeks, major infection surges in some of the country’s most populous states have proved that we are just getting started. And, according to one of the nation’s top infectious disease experts, the potential result could be “apocalyptic.”

Well, let’s get real here.  Some Americans don’t even believe this whole COVID-19 thing is real.  They think it’s a hoax.  And most of the Americans who thought it was pretty much over  haven’t been listening to the health professionals in this country – or any other country.  They thought that this thing was nearly over and was fake news.  It’s all too real.

However – and it’s a really huge however – it’s far from Apocalyptic!

Do we know what the Apocalypse will be like?

I don’t mean to minimize the impact of people dying.  Far from it.  But, I do want to point out the difference between Covid-19 and the Biblical Apocalypse.

According to the World Health Organization, as of June 25, 2020, just under 500,000 people have died from the virus.  Given the difficulty in getting data from some countries, including the U.S., the real number is surely higher.  But let’s say it’s a half million people.  That’s a lot.

However, consider this.  In Chapter nine of Revelation, we read that one-third of mankind will be killed.  In just one of many events that will take place.  One-third!  According to the World Population Clock, there are 7.8 Billion people in the world today.  One third of mankind, today, is 2.6 Billion people!

In other words, if that verse in Revelation took take place today, 5,200 times as many people would die from it – as compared to those who have died to COVID-19 so far.  And don’t forget – it’s just one event.

Why don’t we understand the Apocalypse?

Part of the reason we don’t understand the Apocalypse is because people just don’t read Revelation.  It’s not easy.  For one thing, it’s very hard to understand.  But for another, it can be downright scary.  And while we like to watch scary movies and read scary books, this Book is from God.  Maybe that’s just too much.  So we try to forget or ignore it.

Or, we take the Hollywood approach.  We change the ending.  A hero is invented who’ll prevent disaster.  A handsome or beautiful young star that everyone loves.  Or maybe the washed-up old guys get together and save the world.  Even someone whose life is considered pretty much worthless can be a hero by sacrificing their life and saving everyone else.

Whatever the case, man-made apocalyptic movies always have a happy ending.  Or at the least, even though some people did die – it’s a relatively small number.  The worst-case scenario was avoided.  Someone’s a hero to get people’s spirits back up.  Even if the hero dies in the process.

It’s the way it has to be.  After all, if we watch a movie where the world ended, how can we be sitting there watching it?

And even though we like to watch bad news, tragedies, and horror movies, we do have our limits.  We want heroes, not annihilation.

So we’re just conditioned to assuming that someone will always come up and save the day.  Even in the Amazon series Good Omens, the Apocalypse didn’t happen!  Aziraphale (the angel) and Crowley (the demon) managed to prevent it.  (Full disclosure – the series is far from Biblical, about as far as you can get.  But, if you accept that and don’t try to take it seriously at all, it was quite funny.)

Why do we think COVID-19 is Apocalyptic?

Part of the reason we think COVID-19 is Apocalyptic is maybe because we’re too short-sighted.  We can’t seem to look back at history and learn from it.  Worse things have hit the planet.  For instance, 25 million people died from the plague.  The “real” plague in the 1300’s – not our president’s attempt to call COVID-19 “the plague”.  Which is yet one more reason some can’t get the reality of what’s happening now.  The plague of the 1300’s really did kill almost 1/3 of the population of Europe.  We’re nowhere close to that today.

On the flip side, as I said, we just don’t pay attention to, or don’t believe, what the Book of Revelation says.  Here’s just a sample.  Look how many times one-third of something is affected – killed or destroyed.  And remember, this is but one passage.  I’ve underlined them to make it easier for you.

Rev 9:13 The sixth angel sounded his trumpet, and I heard a voice coming from the horns of the golden altar that is before God. 14 It said to the sixth angel who had the trumpet, “Release the four angels who are bound at the great river Euphrates.” 15 And the four angels who had been kept ready for this very hour and day and month and year were released to kill a third of mankind. 16 The number of the mounted troops was two hundred million. I heard their number.
Rev 9:17 The horses and riders I saw in my vision looked like this: Their breastplates were fiery red, dark blue, and yellow as sulfur. The heads of the horses resembled the heads of lions, and out of their mouths came fire, smoke and sulfur. 18 A third of mankind was killed by the three plagues of fire, smoke and sulfur that came out of their mouths. 19 The power of the horses was in their mouths and in their tails; for their tails were like snakes, having heads with which they inflict injury.
Rev 9:20 The rest of mankind that were not killed by these plagues still did not repent of the work of their hands; they did not stop worshiping demons, and idols of gold, silver, bronze, stone and wood—idols that cannot see or hear or walk. 21 Nor did they repent of their murders, their magic arts, their sexual immorality or their thefts.

Did you catch all of that?

A more important question, if you’re Christian – do you believe it?  If you don’t, why not?  It is part of our Bible, which we believe is the Word of God.  And if we do believe it, how does COVID-19 even come close to Apocalyptic?

And the big question, for this topic If we can’t deal with COVID-19, how are we going to react to the real Apocalypse?

Sure – Satan is hoping he can change the ending foretold in the Bible.

That begs another question.  Are we relying on Satan to be right?  For Satan to be able to prevent all this from happening?  For sure, God’s not going to give John a prophecy like this and then not have it come to pass.

That’s a problem for Christians who don’t want to believe all of this.  We, as Christians, cannot write an alternative outcome.  It will happen.  And no one is going to prevent it.  Nor is anyone going to bring it to some final conclusion other than what God foretold us.  No one.

Conclusion – Do we know what the apocalypse will be like? (It’s not COVID-19)

Do we know what the Apocalypse will be like?  For most people, apparently not.

Should we know what the Apocalypse will be like?  For Christians, we shouldn’t be totally in the dark about it.  We can’t know the details or the timing.  But we should certainly have an idea about what it will be like.  And how it’s going to end.

For that matter, maybe the most important thing is that we should know how to “survive” it.  The thing is, “surviving” it isn’t the survivalist stuff we talk about today.  It’s not having food and weapons stored up to live through it because we’re “prepared”.

No, it’s actually the “survival” Jesus spoke of.

Mt 6:24 “No one can serve two masters. Either he will hate the one and love the other, or he will be devoted to the one and despise the other. You cannot serve both God and Money.”

Yeah – it’s those treasures in Heaven.  Not the ones on earth.

It’s not about having lots of food and tons of weapons to defend our stash of food.

It’s about love.  It’s about following what Jesus taught.  And leading others to live the same way.

For COVID-19, it’s about things like wearing masks, because we’re concerned about the health of others.  Strangers.  First responders.  Nurses.  Doctors.  Older people.  Children.  People we don’t know that might get sick or die because of our selfish refusal to wear a mask.

A while back, I wrote about the possibility of COVID-19 being a type of modern-day exile.  If it is, I believe we’re failing miserably.

And whether it is or not, I believe what we’re seeing with COVID-19 and the way we react to it – we are nowhere near ready for the real Apocalypse.  And yet, we should be.  After all, Jesus told us:

The Day and Hour Unknown – Mark

Mk 13:32 “No one knows about that day or hour, not even the angels in heaven, nor the Son, but only the Father. 33 Be on guard! Be alert! You do not know when that time will come. 34 It’s like a man going away: He leaves his house and puts his servants in charge, each with his assigned task, and tells the one at the door to keep watch.

Mk 13:35 “Therefore keep watch because you do not know when the owner of the house will come back—whether in the evening, or at midnight, or when the rooster crows, or at dawn. 36 If he comes suddenly, do not let him find you sleeping. 37 What I say to you, I say to everyone: ‘Watch!’ ”

What do you think?  Will this get you to think about how you are dealing with COVID-19?  And will it help to spur you on to prepare for the real Apocalypse?  Not for the sake of this life.  But for the next.

Be on guard! Be alert! You do not know when that time will come.