“‘‘ Lines are being drawn. Sides are being taken. Hiding, trying to keep the world at bay—it’s not an option anymore.” 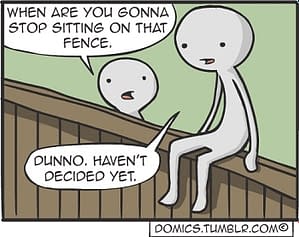 What if we came with a label?  You know – like mattresses?  And they have this scary warning about not being removed under penalty of law?

Maybe then – as long as our parents didn’t remove the label for us – we might actually realize the truth of the opening quote much earlier.  But then – if our parents really got the point themselves, then maybe we wouldn’t need the label.  Unless they scared the heck out of us and we didn’t want to hear or believe the message.  So we went and hid anyway.

The quote above and info on the book it comes from are available at amazon.com  http://amzn.to/2aJ9TQ4

What would the label say?

So what are these sides?

And that means what?

11:23 The one who does not intentionally support Jesus opposes him, making neutrality impossible. Even the worker in 9:50, whom the disciples described as “not one of us,” was apparently a believer, acting in Jesus’ name (see note on Mk 9:38), and Jesus did not condemn him.  [1]The New International Version Study Bible Notes

Whoever Is Not Against Us Is for Us

Mk 9:38 “Teacher,” said John, “we saw a man driving out demons in your name and we told him to stop, because he was not one of us.”
Mk 9:39 “Do not stop him,” Jesus said. “No one who does a miracle in my name can in the next moment say anything bad about me, 40 for whoever is not against us is for us. 41 I tell you the truth, anyone who gives you a cup of water in my name because you belong to Christ will certainly not lose his reward.

with the following notes –

9:38 not one of us. The man apparently was a believer, but he was not one of the exclusive company of the Twelve. Nevertheless he acted in Jesus’ name and had done what the disciples, on at least one occasion, had not been able to do (see vv. 14-18,28).
9:39 Do not stop him. Jesus’ view of discipleship was far more inclusive than the narrow view held by the Twelve.
9:41 I tell you the truth. See note on 3:28. gives you a cup of water. God remembers even small acts of kindness extended to believers because they are believers. his reward. Including God’s approval.  [2]The New International Version Study Bible Notes

And that one has a reference to the note for Mark 3:28, so let’s check that one out as well –

3:28 I tell you the truth. A solemn affirmation used by Jesus to strengthen his assertions.   [3]The New International Version Study Bible Notes

we see again, as in other articles, we can’t just look up one thing and instantly get “the meaning”.  Usually, it involves tracking down lots of different links to various other things.

For – against – or sitting on the fence?

What do we have then?

The key is about taking a side.
The key is to not sit on the fence – claiming to be neutral or undecided – but to jump off the fence and get on one side or the other.

Because remaining on the fence is in fact choosing a side.

You say you didn’t know that?

That’s because you didn’t read a label.  If you had, you would know that.

How do we show that these are the same?  If you remember some simple algebra =

The two statements are actually identical.

What’s missing is the option of not having decided.
There’s no option for being “neutral”.  Because there’s no such thing as neutral.  As it says – if we’re not for Him – we’re against Him.  And if we’re not against Him – we’re for him.  Period.  End of discussion.  As they say today – drop the mic.  As we used to see in Snagglepuss cartoons – exit stage left.  or Porky Pig – that’s all folks.  Whatever it takes to get you to understand – there are only two choices – for or against.

Being neutral – it’s a “pretend” state of mind.

Sitting on the fence – it’s a false assumption that we haven’t chosen sides.

If we actively participate in spreading the words of Jesus – we are obviously for Him.

If we choose to not participate – we can pretend we haven’t chosen sides.
However – while we’re not participating – we are certainly witnessing acts that are taken against the followers of Jesus.  And when we see those acts – and do not provide help / comfort to those followers – we have in fact chosen a side.  We are in reality against them.  We have taken up with the forces operating against Jesus,

It says that on the label.

Oh yes – you say you have no label.

Up to now, I’ve haven’t been against your claim of not having a label.
I sat on the fence for that one. For a while.

But no more.
I’m getting off the fence now.

Jer 31:33 “This is the covenant I will make with the house of Israel
after that time,” declares the LORD.
“I will put my law in their minds
and write it on their hearts.
I will be their God,
and they will be my people.

I know – it says the house of Israel.  But Jeremiah was Old Testament.
This is New Testament time now – and this covenant was meant to be with you as well.  Whoever you are.  Every one of us.

God’s law is written on your heart.

Ro 2:12 All who sin apart from the law will also perish apart from the law, and all who sin under the law will be judged by the law. 13 For it is not those who hear the law who are righteous in God’s sight, but it is those who obey the law who will be declared righteous. 14 (Indeed, when Gentiles, who do not have the law, do by nature things required by the law, they are a law for themselves, even though they do not have the law, 15 since they show that the requirements of the law are written on their hearts, their consciences also bearing witness, and their thoughts now accusing, now even defending them.) 16 This will take place on the day when God will judge men’s secrets through Jesus Christ, as my gospel declares.

This is Paul – the Apostle to the gentiles.  So again – whether you are Jewish (who received the law on their hearts from the Old Testament) or something (anything) else – this is about you.

God’s law is written on your heart.

In Hebrews (yes, a New Testament book), we see a reminder of the verses from Jeremiah –

The High Priest of a New Covenant

Heb 8:1 The point of what we are saying is this: We do have such a high priest, who sat down at the right hand of the throne of the Majesty in heaven, 2 and who serves in the sanctuary, the true tabernacle set up by the Lord, not by man.
Heb 8:3 Every high priest is appointed to offer both gifts and sacrifices, and so it was necessary for this one also to have something to offer. 4 If he were on earth, he would not be a priest, for there are already men who offer the gifts prescribed by the law. 5 They serve at a sanctuary that is a copy and shadow of what is in heaven. This is why Moses was warned when he was about to build the tabernacle: “See to it that you make everything according to the pattern shown you on the mountain.” 6 But the ministry Jesus has received is as superior to theirs as the covenant of which he is mediator is superior to the old one, and it is founded on better promises.
Heb 8:7 For if there had been nothing wrong with that first covenant, no place would have been sought for another. 8 But God found fault with the people and said :
“The time is coming, declares the Lord,
when I will make a new covenant
with the house of Israel
and with the house of Judah.
Heb 8:9 It will not be like the covenant
I made with their forefathers
when I took them by the hand
to lead them out of Egypt,
because they did not remain faithful to my covenant,
and I turned away from them,
declares the Lord.
Heb 8:10 This is the covenant I will make with the house of Israel
after that time, declares the Lord.
I will put my laws in their minds
and write them on their hearts.
I will be their God,
and they will be my people.
Heb 8:11 No longer will a man teach his neighbor,
or a man his brother, saying, ‘Know the Lord,’
because they will all know me,
from the least of them to the greatest.
Heb 8:12 For I will forgive their wickedness
and will remember their sins no more.”
Heb 8:13 By calling this covenant “new,” he has made the first one obsolete; and what is obsolete and aging will soon disappear.

The High Priest of The New Covenant?  That would be Jesus.  Again – this applies to all of us.  Every one of us – no matter what.

God’s law is written on our hearts.

We DO have a label

There’s no excuse.  Because each of us has a label.  It’s got the rules of engagement on it.
And it’s got a simple multiple choice / fill in the blank question at the end.

The two possible answers for filling in the blank:

Which did you pick?

You must pick one.