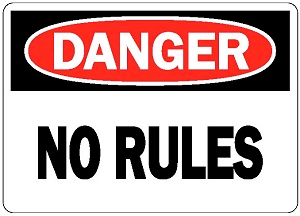 We hate rules.  But could we live without them?

Take the game of Monopoly for example.  There’s lot of rules.  And we follow them.
Especially when we can use one of them to nail one of the other players.
Like when someone else gets the advance token to Boardwalk card, when we own Boardwalk with a Hotel on it.
The other person can’t ignore the rule that says they have to do what that card tells them to do.

Yes – rules are awesome!  Until they apply to us.

That would be dangerous.  Either people wouldn’t play – or they’d kill each other.

But that’s not what happens.
We learn the rules.
And we play according to the rules.

Don’t laugh.
It’s true.
And maybe we have to go deep down inside ourselves to admit it – but we know it is true.

I remember a big family “fight” one time.  Not a fist fight.  But a really, really big deal.  It wasn’t monopoly.  It was Trivial Pursuit.  I always used to lose at the very end – when someone else got to pick the category for me, and I had to answer a question from that one.  They always picked literature for me.  You know – the classics.  Shakespeare was common.  I don’t remember the others anymore, but there were a handful of authors that were definitely the most common.
So I went out and bought those books.  And I read them.  Then I started to win.
Other family members got upset.
Then I noticed one of them – whenever it was their turn to ask a question – kept turning the card over – reading both sides.  If you don’t remember – there were questions on one side, and answers on the other.  There was no need to continually be flipping over the cards.   Finally, I realized they were memorizing the questions and answers.  I called that person on it.  Everyone else got mad at me for even suggesting the possibility.  From the expression on the person’s face – they knew they just got busted.  But wouldn’t admit it.
That was the last time we all played Trivial Pursuit.
It was also the last time I visited them for quite a while.  I was told not to.  They just couldn’t have someone like me in the house.  Imagine – actually going out, buying books, and reading them to win a game.  So much effort just to win a game.  And then having the nerve to point out that someone else was winning by cheating.  Cheating!  Awful.  Unacceptable.  I was told I was too competitive.  I guess cheating isn’t competitive.  It’s just a normal thing to do.

Isn’t that where we are with God?

He really doesn’t have a lot of rules for us.  They are plainly spelled out in His Book – The Bible.

People have added much to God’s rules.  Made it harder to follow them.  But we don’t have to follow those “rules“, because they aren’t part of the Book.  In fact, the Book warns of of those people and their “rules” –

The Yeast of the Pharisees and Sadducees

So there really are a very few rules to follow.  And we know them.

But we can’t get away with trying to cheat.  Because He sees everything.

So we do the next best thing.
We get mad at Him.
We tell Him to go away.  We tell Him that everything’s His fault.  We tell Him that we’d be better off without His rules.
And so we play this game called life (real life, not the game of the same name).
Some will claim He doesn’t exist.
Others will send Him away, knowing that He does exist, but pretending that they can do life without Him.
Others will pretend to follow His rules, all the while cheating at every opportunity.

And to all of these people, He says OK.

And then what will we do?

Lk 13:28 “There will be weeping there, and gnashing of teeth, when you see Abraham, Isaac and Jacob and all the prophets in the kingdom of God, but you yourselves thrown out. 29 People will come from east and west and north and south, and will take their places at the feast in the kingdom of God. 30 Indeed there are those who are last who will be first, and first who will be last.”

For more on The problem of rules, also see:

The problem of rules

and on my other site: