The Fall of Man

Ge 3:1 Now the serpent was more crafty than any of the wild animals the LORD God had made. He said to the woman, “Did God really say, ‘You must not eat from any tree in the garden’?”
Ge 3:2 The woman said to the serpent, “We may eat fruit from the trees in the garden, 3 but God did say, ‘You must not eat fruit from the tree that is in the middle of the garden, and you must not touch it, or you will die.’ ”
Ge 3:4 “You will not surely die,” the serpent said to the woman. 5 “For God knows that when you eat of it your eyes will be opened, and you will be like God, knowing good and evil.”
Ge 3:6 When the woman saw that the fruit of the tree was good for food and pleasing to the eye, and also desirable for gaining wisdom, she took some and ate it. She also gave some to her husband, who was with her, and he ate it. 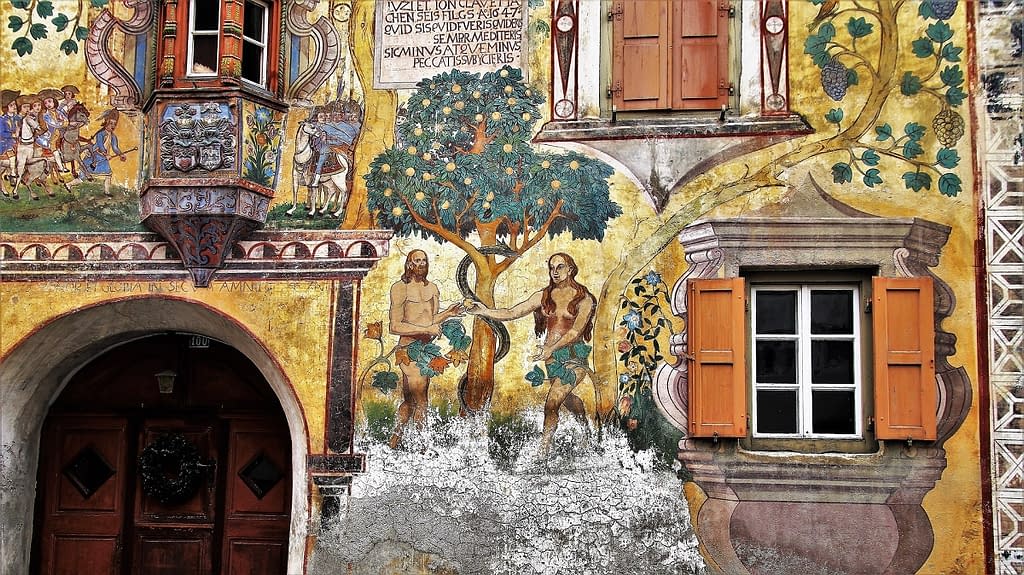 We all read that passage – and we see the result in the image.  Adam and Eve kicked out of the Garden of Eden.

All of a sudden last night, I was reading this passage – along with others before and after it – that were being used to talk about people messing up God’s intended plan for the relationship between men and women.  I’ll write about that another time.

The point today is about something else entirely.

We look at the world as messed up – because of the fall.

We argue between different denominations about whether God allows free will or has total control over every little thing that happens.
It’s the argument between foreknowledge (that God knows what will happen) versus predestiny (God predetermines what’s going to happen).

As I was reading this, it was like a light went on.

Even in the Garden of Eden before the fall – Adam and Eve had free will.

Eve ate the fruit from the tree of the knowledge of good and evil before the fall.
It was their free will that caused the fall.

To believe otherwise would be to say that God caused evil.  In essence – that God is evil.

People point to things Jesus said – to things that Paul wrote – and argue over whether they meant God knew everything ahead of time, or God made everything happen the way He wanted.
I don’t remember ever reading / hearing anyone point to Eve’s decision and saying God made her do that.
To say God knew it would happen – that’s one thing.  As I’ve often said – true love requires a choice.
To say God made that happen – that’s something else entirely.

Which one is it really?

I guess we’ll find out.

Which one do I really want it to be?

God’s Love and Ours

1Jn 4:7 Dear friends, let us love one another, for love comes from God. Everyone who loves has been born of God and knows God. 8 Whoever does not love does not know God, because God is love. 9 This is how God showed his love among us: He sent his one and only Son into the world that we might live through him. 10 This is love: not that we loved God, but that he loved us and sent his Son as an atoning sacrifice for our sins. 11 Dear friends, since God so loved us, we also ought to love one another. 12 No one has ever seen God; but if we love one another, God lives in us and his love is made complete in us.
1Jn 4:13 We know that we live in him and he in us, because he has given us of his Spirit. 14 And we have seen and testify that the Father has sent his Son to be the Savior of the world. 15 If anyone acknowledges that Jesus is the Son of God, God lives in him and he in God. 16 And so we know and rely on the love God has for us.
God is love. Whoever lives in love lives in God, and God in him. 17 In this way, love is made complete among us so that we will have confidence on the day of judgment, because in this world we are like him. 18 There is no fear in love. But perfect love drives out fear, because fear has to do with punishment. The one who fears is not made perfect in love.
1Jn 4:19 We love because he first loved us. 20 If anyone says, “I love God,” yet hates his brother, he is a liar. For anyone who does not love his brother, whom he has seen, cannot love God, whom he has not seen. 21 And he has given us this command: Whoever loves God must also love his brother.

If we truly love – as God loves – wouldn’t we want everyone to at least have the possibility / option of being saved?

Image by pasja1000 from Pixabay