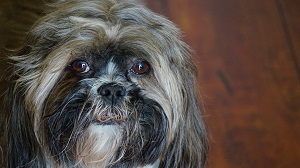 What can we learn from a dog?

The little guy on the left has cancer.  Came within a week or so of dying.  Three weeks later, he was given an 80% chance of remission.  And his attitude is one I hope I have – should something like that happen to me.

This was written on March 12, 2016.
It’s August 2016 now.  I’m re-posting it now, because there’s going to be an update, and it was originally on a different site.  The update wouldn’t make sense without this – so, here it is.

I’ve written before about how looking at the way our pets – dog’s in my case – interact with us.  And how that can show us what our relationship with God can / should be like.  That’s assuming, of course, that we are good to them and they trust us.  Which – by the way – is how God would like us to look at Him.

So Dewey – a Shih-Tzu from a rescue shelter – is probably 10 to 12 years old, but being a rescue it’s impossible to really know.  In any case, our regular vet says that he’s not old enough to be getting lymphoma because he’s not “an old man”.  Within a week, Dewey went from being an active middle-aged guy to having no energy at all.  From barking at the mail man / squirrels / UPS & FedEx trucks / jumping up on all the furniture – to not even having the strength to jump up on anything but the lowest chairs.
He had a blood test 4 months earlier – and it came back totally normal.
He’s got an incredible groomer that notices everything that’s not normal and tells us to have it checked out.  She didn’t see anything unusual either.

All of a sudden – no energy – and we noticed some lumps under his chin.  Lymph nodes getting big and hard.

Within the week that tests were run – they got really big – and more of them started doing the same throughout his body.  An X-ray showed a spleen so big they estimated it weighed about 2 pounds.  And Dewey only weighs 14-15 pounds.

But he came out of that exam – about 2 hours long – using what little energy he had left to be trotting across the waiting room to greet us.

We got a few different medications to give him – some to help with the lymphoma – others to help with the side effects.  He had digestive issues after the treatment.  He got more meds prescribed.  A couple are liquids that he gets through a plastic syringe into his mouth – and it’s obvious they don’t taste good.  He eats 4 times a day – and about twice as much as normal for a dog his size – just to keep up his weight.  After three weeks, we still haven’t been able to get his weight up.  He’s losing so much weight in dead cancer cells & was having so many digestive issues that even keeping his weight at 13.4 pounds has been the best we can do.

But the doc says he’s responding very well.  It came on him so hard and so fast that they were concerned about too many cells dying to fast. She said that often, when it comes on that quickly, the chemo will also work just as quickly.  Which could actually be a problem for the dog.  So only losing a pound and a half is actually “OK” in his case.

The thing to learn though – is Dewey’s attitude.

Like I said – it’s got to be obvious to him that he’s got health issues.  He’s getting all these medications that he doesn’t really like.  He’s eating special food in order to be able to keep in in him.  Oh yeah – he’s getting a diuretic on chemo day, so he has to go outside a lot for a couple days after that.

But his attitude is awesome.  As soon as he has energy – he’s back to normal.  Yes – he get’s tired.  And then he has to slow down.  But he’s right back up again in a little while.  When I take his two “brothers” (by other mothers) for a walk, he really wants to go along.  After two weeks – he has the energy to go for a slow walk.  Not the normal one – but he’s so happy now when he gets to go with the rest of us.

If anything, he spends more time with me and my wife than before.  He’s not mad at us for what he’s going through.

When we go to either his regular vet (at least once a week) or to his cancer vet (once a week) – in spite of all the poking / prodding / sticking / whatever else he goes through in the back rooms – when they come to take him back for his tests & treatments – he’s up and bouncing on back there.  Amazing.

What if we just trusted God – the one who’s in a similar relationship with us –  as Dewey is to my wife & I?
What if we were up for whatever He had for us – even if it seems to be painful at the time?
What if we had Dewey’s attitude – we’re happy for the relationships – and just assume that whatever’s happening will be good for us.
As Dewey “knows” – we take good care of him and he trusts us.
What if we could “know” that God was the same way with us – instead of listening to those who would tell us otherwise?

What if we were up for the relationship that God wants to have with us?

I’m adding this update on August 29, 2016.
The next part though, will be a different article.

During his whole chemo ordeal, Dewey did have his issues.  He often had digestive problems.  He got tired.  He went to a couple of emergency clinics – I think three times.

Somehow, he even hurt his back so badly that he couldn’t walk.  I found him on the kitchen floor, where he was waiting for lunch, but unable to stand and it was painful to breathe.  I took him to the vet.  He was moving and looking more alert.  That was the adrenaline and excitement of going someplace he loves to be.  A little over a day later, after pain meds and forced rest – he was doing much better and wanted to be “normal”.  The doc said 4 weeks with no jumping.  After those 4 weeks – he was back to jumping and barking at things.  Back to “normal”.  At least, normal with cancer.

Clearly though – he was happy.  After a while, his treatments went to every two weeks.  Then every three weeks.  Judging from his attitude, he definitely had way, way many more good days than “OK” days, and very few “bad” days.

He just loves people – loves the attention he gets – loves living.  He looks at the bright side.  Always – unless he doesn’t have the energy to look at anything.  And that’s almost never.

We pay close attention to his quality of life.  I can’t stand even the thought of one of them in pain.  Dewey is awesome.

I’m retired – my wife still works – sometimes late into the evening.
Dewey and I have breakfast together in the morning.  And lunch.  And when my wife works late, he’s laying right next to me on the couch while I have dinner.

I look at him – like I said – and wish my relationship with God could be like that.
Always looking at the bright side.
Always trusting Him – even when it doesn’t seem like what’s happening is good for me (from my point of view).

I pray that I will learn from him – looking at our relationship as an indication of what my relationship should be with God.