I often write about our free will –
our choice to follow God or not.

One of the pastors said that God must have some purpose for this.
I agreed – and right away knew it was going to be something to write about.
something for me –
and for whoever reads this.

I totally believed this.
As Christians – we always hear that God can turn things that are evil into something that can let His glory shine.
As Christians – hopefully we believe that.
We also know that we often don’t see the final result.
We just take it on faith when things happen to us.

Part 2 – today is about something that my wife pointed out about this sequence of events.

Before I left the house with Hachiko that day –
I had this feeling that I should check his collar.

I shrugged it off –
we’d been walking with it for a few weeks now –
nothing’s changed –
it has to be OK.

The feeling came back
check the collar –
I really didn’t want to –
had to get going –
but it was so strong –
so I checked the collar.

I even tried to pull it off his head.

It hadn’t really been necessary to check after all.

But – Hachi did actually get his head through the collar.

When that happened – I had a choice.
I could be angry at God for letting it happen –
or –
I could ask Him for help.

I asked Him for help.

There’s different reasons why He might let it happen though –

but I believe there was a good reason.

Back to the choice.

Instead of doing what I did, I could have been angry.
Then whatever good God had intended would have been prevented from happening –
Hachi would have gone through all that for nothing –
I may or may not have gotten him back –
and my relationship with God would likely have been affected – at least for a while.

I often write about our free will –
our choice to follow God or not.

Had I taken the other path –
I trust that whatever He wanted to come out of this –
it still would have happened –
just in another way.

There’s no way I – or any of us – can prevent His will from being done in the end.
We can certainly mess up our own lives –
but we cannot change the fact that in The End –
He’s God – and He wins.

So far – probably no surprise here.

But then there’s that thing my wife said.

Remember where I said I checked his collar –
after not doing it – not wanting to do it –
but still feeling so strongly that I needed to do it?

And then feeling like it wasn’t really necessary after all?

And then Hachi still gets out of it?

That’s where my wife saw something I had missed –
something I was too busy blaming myself for – where she saw the truth.

The reason I had to check the collar –
it wasn’t so that it wouldn’t happen –
it was so that I’d know –
it wasn’t my fault.

I don’t know why for sure –
although I can come up with a lot of good reasons –
but this was something that God was going to allow to happen.

But at the same time –

He was making sure that I knew it wasn’t my fault.

How much love is that?

It still makes me want to cry even now –
realizing that He cares about me so much that He’d do that.

And even after I did it –
I still didn’t realize what He’d done for me.

He could have let it go at that –
could have just said that He’d tried – and let me blame myself.

I can’t help but wonder –

how many other times has that happened –

God’s trying to tell me something –
but I’m not hearing Him.
Even when I “hear” Him –
I’m not listening – not paying attention – or outright ignoring Him?

Remember in Part 1, where I mentioned that Hachiko was pretty much hiding behind a table the first few days we had him?  The picture at the top is him by the corner of that table, with his best buddy – Donnie, a little Terrier (maybe Havanese?) mix about 1/4 his size.

Someone abandoned  him where I worked – a large university.  He was there for almost 2 months.  He showed up some time in July, and was there until early September.  It was in the L.A. area.  Very hot!  Chows aren’t really made for heat, with all that thick undercoat.  But someone dumped him.

There was a little patch of grass by the side of the road, right at one entrance to the campus, at the edge of a parking lot.  He would always be there, on that little piece of grass.  Every time a car went by, his head would be following it – apparently looking for his previous owner to come back and get him.

I say that, because many people tried to pick him up.  Including me and my wife.  I talked to other people who also had tried, but as soon as anyone got within a couple feet of him, he’d run off a little ways.  But never very far.  He wasn’t going to leave that patch of grass.

He was near the student dorms, so the kids would leave food and water out for him.  (Bless them!)  But the groundskeepers apparently were dumping out the water and taking the food away.  Unbelievable.  I was told they also were going after him with the lawn mowers and little carts they drove.  Again – unbelievable.  But for some reason, Hachiko kept waiting for the seemingly equally cruel person who had dumped him there.

Finally, word got to someone that the campus police were going to do “whatever it took” to get rid of this dog.

One of the staff people, along with one of my coworkers, managed to lure him into her truck, using a female Rottweiler as “bait”.  Success!  Unfortunately, she also has a male German Shepherd (both her dogs were also rescues), who wasn’t very happy about a second male showing up.  It wasn’t working.  The two guys got into a fight.  She couldn’t keep the Chow.

Now – they didn’t know that I’d also tried to rescue this Chow.  But my coworker told me about the rescue of the Chow – that the other person couldn’t keep him – and asked if I’d like to try him out with my guys.  I said I’d have to talk with my wife, although I pretty much already knew the answer.

We set up a time for Hachiko to be brought over to our house.  As you can see in the picture below, we kept a leash on him, because we really didn’t know what to expect.  The picture below was not posed.  This really happened! 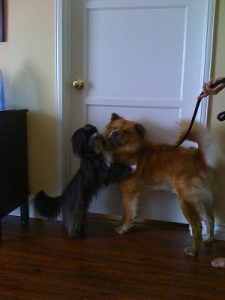 Little Donnie walked right over – got up on his back legs – and gives the big guy a hug!

You have to know Donnie’s story as well to appreciate this.  Donnie’s owners apparently lost their house in a foreclosure.  They left a whole litter of puppies in the back yard.  They were living on grass for who knows how long.  The puppies went to the pound – a kill shelter.  All of them got picked up, except Donnie.  Why?  Probably because Donnie wasn’t perfect.  He has one canine tooth that sticks out and was already very brown – even as a puppy.  So no one wanted him.  Fortunately, he got picked up by a rescue shelter.  We saw him on the web, and wanted him.  When I called, we were told he had just been taken by a family.  Uh Oh.

But – a couple weeks later, I felt an urge to call the shelter back to ask about Donnie.  I was told the family was bringing him back!  Apparently he bit their 4 year old girl.  I arranged to go get him.

The father was just returning him when I got there.  He was actually trying to talk me out of taking Donnie – because he bites people.  I’m sorry – but with a little child, I can’t help but wonder what the girl did – not intentionally, but probably was just being a little kid and hurt Donnie by accident.  Plus – he’s already a traumatized little dog.  But Donnie was so cute.  Especially with that tooth sticking out!

I lifted him up – told him, “It’s a good thing we don’t have any little kids”, and took him home.

As unlikely as it would seem – these two have been best buddies ever since!  They are like shadows.

Now – I ask you – how’s that for a lesson on how we should treat other people?

And – there’s a flip side to that lesson.  When we need love, encouragement, something to pick us up – how’s that for a lesson on letting someone do that for us? 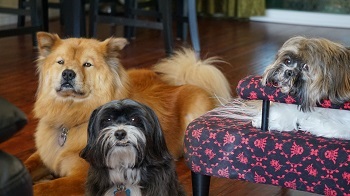 The image to the right is our “family”.  The third member is Dewey – a Shih-Tzu, whose owner passed away and he ended up at a rescue shelter as well.  They’re all so different – but all get along.  I did have to teach Hachiko the pack order – that I was #1, my wife was #2, and he was #5.  The little guys – they worked it out themselves for #’s 3 and 4.  We just couldn’t have Hachiko be anything other than last – since he was so much bigger.  It obviously has gone well for the pack.

Not that everything has been totally “well” though.

Dewey is going through chemo right now for lymph node cancer.  The picture was taken shortly after he was diagnosed.  He’s been through about five months of treatment now – and has been such an inspiration.