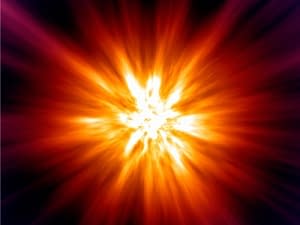 Some say Christians should avoid science.  Others, like me, say we should embrace it.  Could God be the reason scientists are now saying the big bang didn’t happen?

Everything we know about the Big Bang could be wrong

The quote above is from dailydot.com.  Here’s the opening line from the article.  Hope you’re sitting down.

Could the Big Bang theory be wrong? A proposed new model of the universe argues yes—the universe has no origin point at all.

It’s funny.  Some people say Christians should stay away from comparing science and the Bible.  Others – like C. S. Lewis, one of my favorite authors – say the exact opposite.  I’ve always thought embracing both science and the Bible should be a good thing.  I mean – what are we afraid of?  That God lied about how the universe was created?  Or maybe that He doesn’t know how it happened?

The fear is that by trying to use the Bible to explain what scientists say, we are up against a moving target – because even though science claims to have the answer and really “know” things – those “known” things change.  Just like this one says –

Everything we know about the Big Bang could be wrong.

But what about the Bible?

OK – that lines up with the Big Bang.  The Big Bang (used to) calls for a massive explosion of energy.  And the purest form of energy is – Light.

And now for the greatest fear of those who say Christians should avoid science – we have the statement that maybe the Big Bang didn’t happen.  But before we panic – let’s look at how this new theory came about and what it says.

Now researchers working in Egypt and Canada have proposed a new model with a much simpler idea of the beginning of the universe: There wasn’t one.

Oh.  So the Big Bang didn’t happen – because science can’t come up with a cause for it.  Therefore, the universe has always existed?

A new “knowledge” (aka theory) was inevitable

Does that mean there’s a problem now with what the Bible says?
Not at all.
It means that Christians need to be aware of the change in “knowledge” – and why that change took place.  It’s not unlike what happened to the word “evolution” after Darwin came on the scene.  I have an article from my old site that I guess I need to move over here.  It talks about how evolution used to be used by Christians – including the aforementioned C. S. Lewis – to describe their own beliefs, including that God controlled the evolution of His creation from one phase to the next.  Post Darwin, the definition got changed because of a new popular use in the culture – and now Christians find themselves fighting against a word they used to embrace.
So – no – don’t run away from science.  Embrace it.  But also remember it.  When science tries to change the conversation – tries to just turn 180 degrees to do nothing other than take credit away from God – call it out.  Don’t forget it.

The new model moves away from the “expanding universe” theory. It also sidesteps the matter of the universe’s previous infinite size and density, which the paper calls the “smallness problem,” by relying on a “cosmological constant” term that puts the universe at a finite size.  In other words, instead of originating from a single point in a singularity, the universe has simply always been around.

Let’s look at one sentence again –

It also sidesteps the matter of the universe’s previous infinite size and density, which the paper calls the “smallness problem,” by relying on a “cosmological constant” term that puts the universe at a finite size.

Really?  The universe has a finite size?  If that’s really true – then there must be an end to the universe somewhere.  It may be billions or trillions of light years away from us.  But if it really is finite – then it has boundaries.
This begs a really important question –
What’s on the other side of the edge of the universe?

The model also avoids utilizing the theoretical existence of dark energy to explain why the universe began to quickly accelerate about 7 billion years into its existence.

Yes – another issue side-stepped, in the interest of making this new theory work.

You see – there’s have been all sorts of explanation of this acceleration phenomenon.  There are also claims that it can still be witnessed – even today – in some parts of the universe that are still developing.  Now – that’s all out the window.
This begs the question – what do they do with all the “knowledge” that led to these claims that time wasn’t always constant?

You see the problem here.  If time isn’t always constant – then something has to exist outside of time.  That sounds too much like God.  So – anything that even remotely sounds like it’s operating outside of time just has to go.

Conclusion – problems with the Big Bang

The researchers told Phys.org that they were motivated to explore the theory after realizing what the implications were for problems related to the Big Bang. “It is satisfying to note that such straightforward corrections can potentially resolve so many issues at once,” Das noted.

I submit to you –

Ro 1:18 The wrath of God is being revealed from heaven against all the godlessness and wickedness of men who suppress the truth by their wickedness, 19 since what may be known about God is plain to them, because God has made it plain to them. 20 For since the creation of the world God’s invisible qualities—his eternal power and divine nature—have been clearly seen, being understood from what has been made, so that men are without excuse.
Ro 1:21 For although they knew God, they neither glorified him as God nor gave thanks to him, but their thinking became futile and their foolish hearts were darkened. 22 Although they claimed to be wise, they became fools 23 and exchanged the glory of the immortal God for images made to look like mortal man and birds and animals and reptiles.

I feel like events that call to mind these verses in Romans are coming up more often lately.
Like it’s  target rich environment.  Too many times when there are attempts to remove God from day to day life.
Maybe Satan feels like it’s time for a massive attack?
The question becomes – are we going to just sit back and be targets – are we going to just be worn down?

Ro 1:28 Furthermore, since they did not think it worthwhile to retain the knowledge of God, he gave them over to a depraved mind, to do what ought not to be done. 29 They have become filled with every kind of wickedness, evil, greed and depravity. They are full of envy, murder, strife, deceit and malice. They are gossips, 30 slanderers, God-haters, insolent, arrogant and boastful; they invent ways of doing evil; they disobey their parents; 31 they are senseless, faithless, heartless, ruthless. 32 Although they know God’s righteous decree that those who do such things deserve death, they not only continue to do these very things but also approve of those who practice them.

This last set of verses – that’s for us.  Christians.  We cannot afford to reach the point where we did not think it worthwhile to retain the knowledge of God.  Otherwise – the verses after that will apply to us.

I’m not saying to go on the warpath and start shooting back and antagonize people.  But I am saying that we cannot afford to keep staying away from science.  What happened with the word evolution is really like shame on “us”.  When I first read what “evolution” used to mean – I was shocked.

We shouldn’t let the same thing happen here.  But if we don’t retain the unchanging knowledge of God – and also retain the changing knowledge of man (science) – it could very well happen again.  And then the next generation will be wondering what happened.  They’ll be wondering how we let science redefine words that we used to use.  Just like Christians used to use the word evolution to describe God’s influence over His creation.

Ro 1:20 For since the creation of the world God’s invisible qualities—his eternal power and divine nature—have been clearly seen, being understood from what has been made, so that men are without excuse.