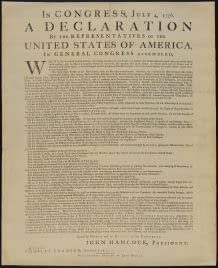 We hold these truths to be self-evident, that all men are created equal, that they are endowed by their Creator with certain unalienable Rights, that among these are Life, Liberty and the pursuit of Happiness.

But just how “self-evident” are they?  Maybe that depends on just who “self” is?

The Declaration of  Independence does say the words above.  But I wonder – do they mean the same thing to us as they do to the Creator to whom we assign those words?

1. the condition that distinguishes organisms from inorganic objects and dead organisms, being manifested by growth through metabolism, reproduction, and the power of adaptation to environment through changes originating internally.

2. the sum of the distinguishing phenomena of organisms, especially metabolism, growth, reproduction, and adaptation to environment.

4. a corresponding state, existence, or principle of existence conceived of as belonging to the soul: “eternal life.”

OK – eternal life is there at number four.  But look at the first three.  I’m going to bet that few people think of “life” in those terms.

This is all about enjoying life – having fun – having a good time.

But what of our Creator?  What did He mean?
Let’s look at some examples –

Jn 10:7 Therefore Jesus said again, “I tell you the truth, I am the gate for the sheep. 8 All who ever came before me were thieves and robbers, but the sheep did not listen to them. 9 I am the gate; whoever enters through me will be saved. He will come in and go out, and find pasture. 10 The thief comes only to steal and kill and destroy; I have come that they may have life, and have it to the full.

This sounds good.  Jesus came so that we may have life to the full.  That sounds like some of the words above.
But before we get too excited, let’s keep going.

Mt 16:24 Then Jesus said to his disciples, “If anyone would come after me, he must deny himself and take up his cross and follow me. 25 For whoever wants to save his life will lose it, but whoever loses his life for me will find it. 26 What good will it be for a man if he gains the whole world, yet forfeits his soul? Or what can a man give in exchange for his soul? 27 For the Son of Man is going to come in his Father’s glory with his angels, and then he will reward each person according to what he has done.

Oh.  This doesn’t sound so good.  Like maybe there’s a difference between life while we’re here on earth – versus the life that we have afterwords.  Better keep going.

Lk 12:13 Someone in the crowd said to him, “Teacher, tell my brother to divide the inheritance with me.”

Lk 12:14 Jesus replied, “Man, who appointed me a judge or an arbiter between you?” 15 Then he said to them, “Watch out! Be on your guard against all kinds of greed; a man’s life does not consist in the abundance of his possessions.”
Lk 12:16 And he told them this parable: “The ground of a certain rich man produced a good crop. 17 He thought to himself, ‘What shall I do? I have no place to store my crops.’
Lk 12:18 “Then he said, ‘This is what I’ll do. I will tear down my barns and build bigger ones, and there I will store all my grain and my goods. 19 And I’ll say to myself, “You have plenty of good things laid up for many years. Take life easy; eat, drink and be merry.” ’
Lk 12:20 “But God said to him, ‘You fool! This very night your life will be demanded from you. Then who will get what you have prepared for yourself?’
Lk 12:21 “This is how it will be with anyone who stores up things for himself but is not rich toward God.”

Now that’s downright worrisome.  God called that man a fool.  The life of eat, drink and be merry that we had in mind apparently isn’t what the Creator meant.

I wonder.  What did the writers of the Declaration of Independence have in mind?  From what we know of them – I kind of doubt that they meant the eat, drink and be merry that we tend to think of today as our “right”.

Back to dictionary.com.  Here’s the first four definitions again –

1. freedom from arbitrary or despotic government or control.

4. freedom from captivity, confinement, or physical restraint: “The prisoner soon regained his liberty.”

The liberty definitions are close – but I suspect that given what we generally think of today is a bit different.  Let’s look at some of the synonyms again –

But what of the Creator?  What did He mean by liberty?

Jn 8:34 Jesus replied, “I tell you the truth, everyone who sins is a slave to sin.

Given that everyone sins, then everyone is also a slave to sin.  So maybe liberty to the Creator means freeing us from sin?  That’s sounds reasonable.  But then what?

Mk 9:33 They came to Capernaum. When he was in the house, he asked them, “What were you arguing about on the road?” 34 But they kept quiet because on the way they had argued about who was the greatest.
Mk 9:35 Sitting down, Jesus called the Twelve and said, “If anyone wants to be first, he must be the very last, and the servant of all.”

We are so polite these days with the Bible translations.  Servant of all – in those days – really meant slave of all.  Not quite the same meaning.  So is this for real?  We are freed from one form of slavery to put ourselves into yet another?

Mk 10:41 When the ten heard about this, they became indignant with James and John. 42 Jesus called them together and said, “You know that those who are regarded as rulers of the Gentiles lord it over them, and their high officials exercise authority over them. 43 Not so with you. Instead, whoever wants to become great among you must be your servant, 44 and whoever wants to be first must be slave of all. 45 For even the Son of Man did not come to be served, but to serve, and to give his life as a ransom for many.”

To put it bluntly – yes, that’s exactly what it means.

The liberty that the Creator means is the freedom we have to get out from under the slavery of sin – and become a slave to Jesus instead.  That we may – as we saw above – have life to the full.

What about the writers of the Declaration of Independence?  I’m guessing they didn’t really want to be slaves to anybody.  Although – many, if not all of them, did have slaves.

From what we’ve seen so far – the pursuit of happiness doesn’t seem like it’s going to be the happiness that Larry the Cable Guy is thinking of.  Let’s see how this one works out.

Once more – dictionary.com.  Only two definitions, so here they are –

1. the quality or state of being happy.

Joy!  That’s the word.  Let’s run with that one and see where it goes –

1. the emotion of great delight or happiness caused by something exceptionally good or satisfying; keen pleasure; elation: “She felt the joy of seeing her son’s success.”

2. a source or cause of keen pleasure or delight; something or someone greatly valued or appreciated: “Her prose style is a pure joy.”

3. the expression or display of glad feeling; festive gaiety.

4. a state of happiness or felicity.

So – given what we currently think of life and liberty – one would have to assume that our concept of happiness and joy today would also be along those same lines.

What about our Creator?

Oh.  It’s back to that God thing again.  Just hearing the message of God – and His view of life and liberty – is enough to bring joy.

More of the same.

Clearly – the Creator’s view of joy and happiness isn’t really what most of us think about today.

And the writers of the Declaration of Independence?  They may not really line up with either one.  I find it hard to believe that they were into the lifestyle that we are today.  It also seems that they weren’t into the definitions from the Bible either.

Another question that we should be asking?

Before concluding, I’d like to add one more thought.

Let’s go back to the Plymouth Colony.  Without getting into any discussions about who was actually the first group of settlers (they clearly were not) or why the very first people came over from Europe – let’s look at why this group came over.  BTW – many others came for the same reason.

From wikipedia – just a summary –

Despite the colony’s relatively short history, Plymouth holds a special role in American history. Rather than being entrepreneurs like many of the settlers of Jamestown, a significant proportion of the citizens of Plymouth were fleeing religious persecution and searching for a place to worship as they saw fit. The social and legal systems of the colony became closely tied to their religious beliefs, as well as English custom. Many of the people and events surrounding Plymouth Colony have become part of American folklore, including the North American tradition known as Thanksgiving and the monument known as Plymouth Rock.

We see they came for religious freedom.  Not freedom from religion, as so many people in this country want today.  But freedom to follow their own religion – as opposed to the King’s religion they were forced to follow in England.

Their definitions of life. liberty, and the pursuit of happiness – I suspect – were much closer to what our Creator has in mind for us.

They came over in 1620.  The Declaration of Independence was written in 1776.  That’s 156 years later.  And God’s not in the position He started from after those 156 years.  Now, the year is 2015, another 239 years later.  Is it any wonder that God has continued to decline in importance.

I wrote about these verses yesterday – in a post about Christians, the Bible, science – and The Big Bang.  But I’m reminded of them again after writing this one –

Ro 1:28 Furthermore, since they did not think it worthwhile to retain the knowledge of God, he gave them over to a depraved mind, to do what ought not to be done. 29 They have become filled with every kind of wickedness, evil, greed and depravity. They are full of envy, murder, strife, deceit and malice. They are gossips, 30 slanderers, God-haters, insolent, arrogant and boastful; they invent ways of doing evil; they disobey their parents; 31 they are senseless, faithless, heartless, ruthless. 32 Although they know God’s righteous decree that those who do such things deserve death, they not only continue to do these very things but also approve of those who practice them.

Yes – that’s us that Paul’s writing about.  Not the pagans.  Not those who follow other religions.  Us.  Christians.  Christians who seemingly do not think it worthwhile to retain the knowledge of God.  We need to get this back.  Before it’s too late.

Jn 10:7 Therefore Jesus said again, “I tell you the truth, I am the gate for the sheep. 8 All who ever came before me were thieves and robbers, but the sheep did not listen to them. 9 I am the gate; whoever enters through me will be saved. He will come in and go out, and find pasture. 10 The thief comes only to steal and kill and destroy; I have come that they may have life, and have it to the full.

If we don’t get back to the knowledge of God – we also won’t be successful in our pursuit of life, liberty and happiness – the way our Creator intended.