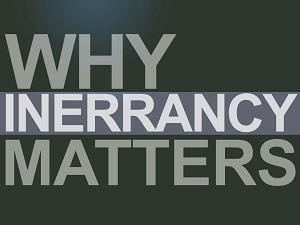 Someone asked a while back on one of the posts if I believe in the inerrancy of the Bible. The implication was that no reasonable person could possibly believe such a thing.  After all – who could possibly believe that the earth was created in six literal days? Or that people walked with dinosaurs?  My answer would be something along the lines of – exactly where does the Bible say either of those things?  In fact – it doesn’t.

The problem isn’t errors in the Bible – the problem is errors in people’s interpretation of the Bible.  If someone wants the Bible to say something – they’ll find a way to make that happen.  It’s human nature to do things like that.  And it’s not just with the Bible.

Look at statistics.  Having taken a few graduate level statistics courses and programmed several statistical analysis models – including for a motion picture studio and a US Navy contractor – I think I have a bit of a background to confirm an old saying – there are lies, damned lies, and statistics.  While they are purely mathematical in nature – they say what they say – the way people interpret them can be night and day different.

I remember reading many years ago that the murder rate in the city in which I was living had gone up 400% from the previous year.  That was the headline in the newspaper.  It sounds awful.  But then when they presented the details behind the numbers – they told a very different story.  In fact – there had been one murder case in each of the previous two years.  One was a single homicide.  The second year it was a father who killed his family, and then committed suicide.  Yes – it was a bad scenario.  But it wasn’t the case of crime running rampant like the headline tried to imply.

And so it is with the Bible.  People can make it say whatever they want.  Until we actually look at the details.

Take the six literal days for creation.  That’s not at all what the original Hebrew text says.  It is what some probably well meaning person translated into English – probably trying to make it seem easier to grasp.  But what the original text actually meant was six periods of time.  Elsewhere on this site, I’ve compared these six periods of time to the various epochs from science.  The creation story told in the Bible is amazingly parallel to the “evolution” story told by science.  Even more amazing – up until the time of Darwin – the word evolution actually included the belief in directed evolution – meaning that it wasn’t random at all, but in fact controlled by a higher power.  How’s that for making something say whatever someone wants?  In a matter of decades – the entire evolution story was transformed to make it disagree with the Bible – even though the actual events do not bear support for such an action.

For more on the topic of evolution, see Is evolution a concept from Satan?  It looks at what we read in English, and what is in the Hebrew texts.

As far as people walking with dinosaurs – while some will try to claim that the behemoth mentioned in the Bible was a dinosaur – this kind of twisting of words isn’t even necessary.  Once we remove the false narrative of six literal days – the whole problem of people and dinosaurs existing together goes away.  It’s as non-existent in the Bible as it is in science / evolution.  There’s nothing at all saying the two ever existed at the same time.

The “problem” is that you won’t find those words in the Old Testament.  Well – at least not the English word mind.  Is this an error?  Not al all.  Looking at the intent of the New Testament Greek word we translate as “mind”, and the Hebrew concept of what we would call the mind – there’s no problem at all.  For more on that, please see The problem of – With all your mind. Or not?

We can also examine The sermon on the mount.  One of the issues here is that many of the Bible translations put things like chapters, section headings, Etc. into our Bibles today that didn’t exist in the original text.  That includes putting “Sermon On The Mount” for an event that’s in two of the Gospels.  There’s things like the descriptions not matching.  One Gospel says it was on a mountain.  Another says it was on a plain.  What about the very real possibility that essentially the same message was given more than once – with one being on a mountain and the other on a plain?  Who among you has never repeated themselves?  If two people were to repeat what you said – from different locations and with slightly different words – do those discrepancies make you a liar?

Even with The Lord’s Prayer, we might read something different between Matthew and Luke.  “Might” read something different?  That sounds odd.  It’s because different the people doing different translations of the Bible don’t always translate the same things.  Or, in this case, chose to leave something out.  If you look at the particular translation you use, you may or may not find – For thine is the kingdom, and the power, and the glory, for ever. Amen. – in Luke’s Gospel, but it will be in Matthew’s.  For more on this, please see  For Thine is … (everything).

Here’s another question for you – especially for those believers who try to placate the folks who insist that the Bible is full of errors.  Exactly what are the details behind those errors.  I’ve read several books on both sides of this issue.  There is not one claim of error that cannot be answered.  There are quite a few related to the three years of Jesus’ ministry.  But remember – there are four Gospels.  Written by four different people.  With different backgrounds.  With different points of view and of interest.  And Jesus was an itinerant preacher.  He traveled for those three years.  It’s inconceivable that He gave a totally different message to each audience – never repeating anything.  It’s also inconceivable that He would have used exactly the same words each time He delivered a similar message.  He was very much into telling people what they needed to hear.  To give the same essential message – but with different words – different order of presenting things – is to be expected.  Rather than being errors when one of the four Gospels “leaves out something” – it’s much more conceivable that either the author of that Gospel left something out – or his particular version came from a different location.  I even had one person tell me that the Gospel authors were literally lying when their presentation didn’t match word for word.

And finally – especially for those believers who are so willing to claim errors in the Bible – why?

What exactly is it that you believe in?  If you are so willing to admit to errors in the Book that you claim to live your life by – and your hope of salvation supposedly hangs on that same Book – what do you really believe?

How do you know that you got all the errors?  Maybe one that pertains to your very salvation is actually an error too, but you don’t know it?  Shouldn’t you do one heck of a lot of research to be sure you’ve got yourself in order?

And why exactly is it that you think God lied to you?  Why would He allow something to be in the Bible if it wasn’t true?  Or don’t you even believe that the Bible is from Him?  If that’s the case – time to go back to square one.  You’ve got major issues.

And some of it’s for me.  If you’ve read my story, you know where I’m coming from.  Then, over the last past year or so, I ended up being forced to retire early for standing up for what was “right”, after that had my wife tell me she wasn’t sure she wanted to be married anymore (still unresolved more than a year later), just got over 3 months of pneumonia, and on and on.  I have lot’s of my own questions for God right now.  I thought He was leading me to something better.  I ask Him – is this better?  ‘Cause I don’t see it that way.  I ask Him to let me go Home – but wonder whether Home will be Heaven or Hell.  Lots of questions.  Lots of doubt.

And yet – I have to believe that what He said is True.  Having been through the statistical and science side of things – the odds for life to be what it is are so astronomically small – it’s harder to be an atheist than it is to believe in God.  An atheist has to have an unbelievable amount of faith in randomness and chaos to believe that God doesn’t exist.  They just refuse to admit it.

The real issue – if we choose to admit it – is something I’ve written about and talked about before.  And it comes down to the difference between believing in God – and believing God.

Even this passage, using the same words, has different interpretations.

Some believe it was meant only for Jeremiah.  I have trouble with that view for a few reasons.  One – does an all knowing God really only have plans for one person, but not everyone else?  Or is the issue maybe with the plans to prosper?  Well, Jeremiah was known as the “weeping prophet”, because of his message and the bad times for God’s people during Jeremiah’s life.  That’s only an issue when we get confused about what God means by words like prosper, hope and future.  It’s not about this life – it’s for eternity.  We also need to consider the events of the time – God’s people were taken into captivity – life as they knew it was over.  Was God really speaking only to Jeremiah – or to all of His people?  Carrying that forward – was God not also speaking to us today?  We can see, just from this one passage, some people try to put God in a box – and other’s try to put words in His mouth.

When we read the Bible, it’s always important to look at language, culture, the remainder of the Bible, even our own backgrounds and prejudices, before we reach conclusions about what God’s Word really says.  And – it’s important to remember that we, as Christians, believe the Bible is the inspired word of God.