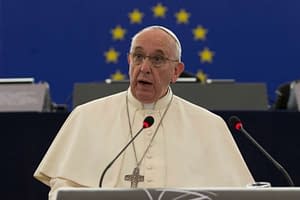 Six hundred migrants were rescued in the Mediterranean the other day, between Sicily and North Africa.

The boats landing daily on the shores of Europe are filled with men and women who need acceptance and assistance.

So where is God in all of this?

Shouldn’t He be taking care of these people?

Good question, you may be thinking.

For more on the story, check out msn.com News (Sorry, this article is apparently no longer available).

As he often does, the Pope is focusing on people, when he says, there should be policy that “revolves not around the economy but around the sacredness of the human person”.

But that’s putting the focus back on the people.  What about God?  Should He just be giving every country an awesome economy so there can be the “normal” governmental and business focus on growing economies and everything else will just work out?  Should God be putting together some awesome miracles to just solve the problem?  Is that what we’re hoping for?

For the real answer – to see where God is in this – maybe we should all go look in the mirror.

In spite of those who think Jesus would maybe be in favor of a socialist government, or at least the overthrow of oppressive governments, there’s absolutely no evidence in the Bible to support that.  Far from it – He lived in the time of the most oppressive government on the face of the planet up to that time.  The Romans would have been the poster child for how to oppress people.  But many rejected Jesus for the very action He refused to even support, let alone do Himself – overthrow that Roman government.

But what did Jesus do?

If we look in John 21, after Jesus’ resurrection, we read this:

We see Jesus asking this question three times, so we know it’s really important – and that the message to Peter after this is going to be critical.  And that message was:

Now – here’s the important part – and one that I believe a lot of people miss out on, (including myself).  We probably all assume when Jesus is talking about His lambs and sheep, He means “the church”.  But why?  And more importantly – His “church” as of what point in time?  And this is something that really hit me the other day.

Jesus knows who’s part of His church.  For consistency, let’s define “His church” as believe who believe in Him.  Maybe they don’t even go to a church building, but in their hearts there’s even the tiniest little spark of belief.  So it’s reasonable to assume He cares about them and would consider them His sheep.  After all – who’s more likely to be a “lost” sheep than someone just barely hanging onto a little bit of faith?

But still – the question hangs out there – as of when?  And then there’s the other question – can we read someone’s heart?

We do not and can not know the answer to either question!  So at any given point in time – how can we possibly know who is part of His “church”?  Who’s a lamb or a sheep?  Who’s a goat?  We just don’t know.  Maybe someone who looks like a goat today will be a sheep tomorrow.  We can’t know.  Maybe someone who looks like a goat is actually already a sheep.  We can’t know that either.  I’m reminded of people in my own church who some viewed as “pew warmers”, but when they find out how active these “pew warmers” are outside the walls of the church building – that perception totally goes away.  They just don’t flaunt what they do.

So – who was Jesus talking about when He told Peter to take care of His sheep?  It has to be everyone.  Every person.  Because any one of them could be a sheep before their life comes to an end.  And we just don’t know.  For all we know – it could be our very act of kindness that starts them down the road to becoming one of the sheep.  And wouldn’t it be awful if that event never took place?

Now, I’m not saying every person has to take care of every other person, or give to every cause that comes along.  We were actually talking about that in our small group last night.  We have to pray about which causes to take up – what things are we going to do on our own.  No one person has an unlimited supply of time or money.  But everyone can do something.  Remember the offering of the poor widow –

Mk 12:41 Jesus sat down opposite the place where the offerings were put and watched the crowd putting their money into the temple treasury. Many rich people threw in large amounts. 42 But a poor widow came and put in two very small copper coins, worth only a fraction of a penny.
Mk 12:43 Calling his disciples to him, Jesus said, “I tell you the truth, this poor widow has put more into the treasury than all the others. 44 They all gave out of their wealth; but she, out of her poverty, put in everything—all she had to live on.”

Again – I’m not saying put in everything.  What you do is between you and God.

My point is that when things like this occur – when there are tragedies that happen in this life – God is here.  He’s in us.  To the extent that God appears to not care, or to not show up – it’s not because He doesn’t care.  It’s because His representatives here on earth – the ones within whom His Holy Spirit dwells – didn’t care enough to show up for Him.

His miracle that would solve these problems – it’s us!  To the extent that the miracle didn’t happen – it’s because we didn’t perform it.

In the article, Pope Francis is speaking to the leaders in Europe.  I can’t help but think that, included in those leaders, would be the leaders of the churches.  And in case one is tempted to think it’s only the Roman Catholic Church – somehow I think Jesus’ request to Peter, who the Roman Catholic’s consider the father of their church, includes any and every Christian church.  Further, for those that claim the Christian Faith, but don’t attend a physical church building, here’s a question – are you not a “leader” of your own church, since the church as Jesus called it is people, not a building.

So when someone asks, “Where’s God?” – may that be a reminder to us Christians – He’s “in us”, as the person of The Holy Spirit.  Then when a situation looks like one where God would want to be doing something, maybe we’ll remember – that’s us!  And then maybe God will show up and His miracles will be done.