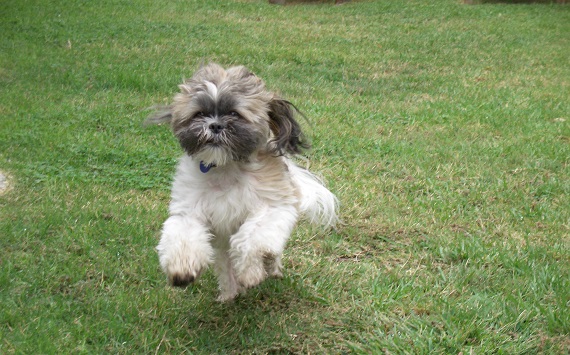 I know I’m going to be crying while I write this.

I’ve written before about Dewey, the little guy on the right.
He was diagnosed with lymphoma back in February of this year.

Dewey fought a brave battle.
And he continued to love life and people throughout.

But it was too much, even for him, last week.

You can read more about Dewey in earlier posts in this series.

He was close to dying before he even started chemo – because the cancer came on so fast.  Then he was close to being declared in remission – but the cancer came back – even faster and more aggressive than before.  Then he got into a trial program for a new drug.  He almost died again, waiting for the one week “chemo free” period that was required for the trial.  Two days after receiving the drug – we could feel the tumors shrinking by the hour.  Seriously – it was working that well.  One more day, and Dewey was having trouble walking.  There had been concern that the tumors were actually being killed off too fast – too many dead cells in his little body that couldn’t be flushed out quickly enough.  He was put on an IV drip for fluids, nutrition and (just in case) antibiotics.  In spite of the fluids, his blood pressure continued to drop – he had a fever that kept going up – and his blood and liver numbers kept getting worse.  Then there was pressure in his brain.  It was the worst case scenario – the cancer was in his brain – and the fight was over.  It was hard to see him in pain – the first time in the entire 8 months that he was moaning / groaning constantly.  The vet said it would have gotten worse.  The old drugs weren’t working and the new one, for physiological reasons, could not enter the brain.  There was no hope.  So we cried,  We put him to sleep.  We cried.  His fight was over.  And we cried some more.

I have never known another dog like Dewey.  There was just so much joy – no matter what.  Until the very end.

We knew right from the start that lymphoma is fatal.  The only question is if / how long it stays in remission.

So Dewey dying wasn’t a surprise.  It wasn’t anything to be angry about – or to question God about.

No.  It was the way it happened.  So many ups and downs.  So many times being within literally days of losing Dewey – and then within a couple days he’s back happy and bouncing around.  And then he’s down again.  And then he’s back.  And then the new drug was going so well so fast.  We thought prayers were finally answered – and Dewey was going to be with us for a while.  And then hours later – Dewey is gone.

The LORD gave and the LORD has taken away

Most of us know this line from Job.

The Lord gives.
And the Lord takes away.

I was talking to one of the pastors at my church about this yesterday evening.

It’s not like it was with Job – and it’s not like it is with other people I know – losing family members or anything like that.  It’s more like the drip, drip, drip of Chinese water torture.  I just want God to stop taking away.

But last night at home there was another conversation in my head.

“What makes you think I did it?”

This is a “conversation” that non-Christians probably won’t understand.  But it’s a critical one.

I’m questioning God as to why Dewey had to die the way he did.  Why all the ups and downs.  Why not just take him right away, if it really had to happen at all.

Me – “The Bible says the Lord gives and takes away.”

God says, again – “What makes you think I did it?”

God says, one more time – “What makes you think I did it?  Job was right about a lot of things, but was he right about that?”

Not unlike what Job said to God, after waiting 40 chapters to even get any kind of response from God.

Job 42:1 Then Job replied to the LORD:
Job 42:2 “I know that you can do all things;
no plan of yours can be thwarted.
Job 42:3 You asked, ‘Who is this that obscures my counsel without knowledge?’
Surely I spoke of things I did not understand,
things too wonderful for me to know.

Job 42:4 “You said, ‘Listen now, and I will speak;
I will question you,
and you shall answer me.’
Job 42:5 My ears had heard of you
but now my eyes have seen you.
Job 42:6 Therefore I despise myself
and repent in dust and ashes.”

Yeah – that pretty much says it all.

As the pastor told me – there has to be something – some reason that we can’t see – for what’s happening.

So there’s another lesson – to be determined – from Dewey.  From what I had while he was alive – from what he brought into other’s lives when they came to know him through his 8 months of courageously and “happily” fighting cancer.  I say happily, because all of the people involved in his treatment commented on how happy he was all the time – even when he didn’t always feel good.  Even when they were poking and prodding him.  Even when they were taking his blood – or filling him up with chemicals.  To me, he was a gift from God.  I enjoyed every moment with him – and even more so these last 8 months.  But he was taken by Satan.  Yes – God allowed it.  But He didn’t initiate it.  And somehow – God will also make it right and come out for good.

Which brings me to yet another lesson.

He will wipe every tear from their eyes.

In Revelation 21:4, we read “He will wipe every tear from their eyes.”, which is a reference to –

Isa 25:8 he will swallow up death forever.
The Sovereign LORD will wipe away the tears
from all faces;
he will remove the disgrace of his people
from all the earth.
The LORD has spoken.

A couple nights ago, I asked God – “So how are You going to wipe away these tears?”

But that immediately turned into – “After what we’ve (all of humanity) done to you, how are You even going to wipe away Your own tears?”

A leap of faith

And that’s why non-Christians probably won’t get what I’m saying here.
But you should really try to understand.

Through all of this – I don’t question my belief in God.  I don’t question His ability to have done something about this – preventing Dewey from getting cancer, or healing him – I question none of that.

And that’s where faith comes in.

I still maintain it takes more faith to deny God is real than to believe He exists.

So I have to believe that as well.

Dewey touched a lot of people during his too short life, especially during his final eight months.  It gave me a chance to share these writings with others, some of whom were not Christian.  Do I throw all that away – and call his death cruel and pointless?  Or do I acknowledge that what Satan intended as something to turn me away from God – and maybe write about that and turn others away as well(?) – or do I acknowledge that what Satan tried to use to turn me away from God will actually do the exact opposite and draw me closer?  And then will that bring others to God as well?

In more blunt terms – will Dewey’s death turn me away from God – or bring me closer to Him?
Will all the people who knew Dewey during his (and me with him) eight month journey through the valley of death see us turn away from God – or move closer to Him?
And for whatever God has in mind to turn Dewey’s experience from something bad to something good – will I turn away from it and say “no God – I won’t do it” – or will I remember all the things I’ve learned from watching Dewey during this journey – and “Yes God – sign me up – I’m with you because you’re with me.”

It’s really not even a little bit hard to decide.

Dewey was a gift from God.  Can I really deny that I totally loved that gift and deny everything that came from knowing him and watching him?  Can I deny that God was the one that brought us together?  Can I deny that all though my life – things have happened that are not just coincidence, but have brought me to the point I am now, with the ultimate purpose and goal of bringing glory to the One who created me – and Dewey – and yes, you – the reader?

For you dog lovers out there – does that mean Dewey’s waiting for me in Heaven?  I honestly don’t know.  I hope so.  I hope he’s there now, playing with his “brothers” from another mother – Sherlock Holmes and Professor Moriarty, who you can also read about here, in All dogs go to Heaven, don’t they?

No matter what happens though – ultimately – there’s the promise that some how, some way, God will wipe away all the tears.  Ours.  And His own.

And that’s reason enough to continue.
Reason enough to start a new leg of my journey.
A journey – maybe with a dog, that would be nice.  But certainly a journey with God at my side, that’s awesome.

No – it won’t always be easy.
Even now – I till feel like crying for Dewey.

But I just cannot give up the hope that my faith gives me.

Because to do that would make everything pointless and hopeless.

To me – to even think everything is pointless and hopeless is so depressing that I just cannot make the leap of faith required to believe it could be true.