Donald Trump or John Lewis – who is poor in spirit?

Donald Trump or John Lewis – who is poor in spirit?  That surely depends on what I mean by spirit.  In one regard, I can think of no one in his position that’s ever had more spirit.  However, in another way, I find spirit pretty much absent.  So which one am I asking about?  Well, this site is about religion, specifically Christianity.  Which “spirit” do you think I’m talking about? 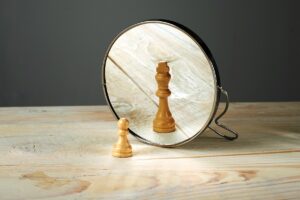 The image at the right kind of gives a clue.

We do need to take away from the connotations of the pawn and king, just a bit.  Keep it at the concept of the size of our ego.  For a Christian, it should be small.  But in the image, we see someone as they are, looking into the mirror and seeing themselves in a very inflated manner.

In other words – a huge ego.  Few people, if any, would fail to see the significance of that image as far as Trump is concerned.

But let me give you a few more clues, just in case they’re needed.

John Lewis – was he poor in spirit?

Here’s an excerpt from something published by AARP:

Lewis was born Feb. 21, 1940, near Troy, Alabama, and attended segregated schools. He graduated from American Baptist Theological Seminary in Nashville, Tennessee, and also earned a bachelor’s degree in religion and philosophy from Fisk University in Nashville.

He was one of the original 13 Freedom Riders, six black and seven white activists who rode buses starting in 1961 into the segregated South to call attention to states’ disregard for U.S. Supreme Court decisions on public bus desegregation. That same year, at age 21, he suffered his first attack: He was punched in the face and kicked in the ribs for his activism when he tried to enter a whites-only bus waiting room in Rock Hill, South Carolina.

“I hold no grudge,” Lewis said in 2009. “Hate is too heavy a burden to bear. … Dr. King taught us to love and forgive, and a lot of people are proud of you. You are leading the way for a lot of people.”

Before Lewis’ election as chairman of the Student Nonviolent Coordinating Committee in 1963, he had been arrested two dozen times for his nonviolent protests as part of the civil rights movement. That included incarceration for 37 days in the Mississippi State Penitentiary — for entering a whites-only area of a bus station in that state.

“Early on, he embraced the principles of nonviolent resistance and civil disobedience as the means to bring about real change in this country, understanding that such tactics had the power not only to change laws, but to change hearts and minds as well,” Obama said.

Donald Trump – is he poor in spirit?

The excerpt below is from a CNN interview with Trump’s Pastor, before the 2016 election.

Donald Trump was ashamed — contrite even — as he spoke to Paula White hours after the video of him bragging about groping women was released.

“I heard it in his voice,” said White, a Florida pastor who, outside of Trump’s family, is his closest spiritual confidant. “He was embarrassed.”

In the video from 2005, Trump admits to hitting on a married woman and boasts that he can wantonly kiss women and grope their genitals because he is a “star.”

During his phone call with White, the GOP nominee said he regretted his remarks and was grateful for the evangelicals still supporting him. Later that evening, he publicly apologized in a video that was remarkably free from the usual rituals enacted by disgraced politicians.

Trump didn’t stand beside his wife, Melania. He didn’t ask for forgiveness. He didn’t lament that he had fallen under sin’s sway but that by God’s grace and with his family’s support he hoped to earn a second chance. In fact, Trump didn’t mention faith, family or reconciliation at all.

Those appear to be two very different people.

But let’s look at how Trump spoke about John Lewis, after his death.  Keep in mind, most people speak more kindly about someone who recently died.  And yet, this is what Trump said, as reported on MSN.

“I don’t know. I don’t know John Lewis,” Trump said in the “Axios on HBO” interview. “He chose not to come to my inauguration.”

Pressed by Swan on whether he found Lewis “impressive,” Trump was likewise noncommittal.

“I can’t say one way or another,” Trump said, before noting again that Lewis had skipped his inauguration and his State of the Union speeches, adding, “Nobody has done more for Black Americans than I have. He should have come. I think he made a big mistake.”

Talk about an ego.  And one huge spirit.  His own view of his own Spirit.

Poor in spirit – but which kind of spirit?

As I said, this is a Christian site.  And while both Trump and Lewis claim to be Christian, one appears to live like it, and the other doesn’t.  Keep in mind, I said “appears”.  Only God really knows.  But for us, appearance is all we have to go buy.

With that in mind, here’s the spirit I’m talking about.

Blessed are the poor in spirit,
for theirs is the kingdom of heaven.

as in what Jesus said in the Beatitudes.

Note that poor in spirit it first.  Without being poor in spirit, we cannot be or do any of the following things: mourn, be meek, hunger and thirst for righteousness, be merciful, be pure in heart, be peacemakers, or react as Jesus did when we’re insulted.

It is, after all, the only way to allow the Holy Spirit – the mind of Christ, the spirit of God – into our lives.  That’s a very important of being a Christian.  Allow God’s Holy Spirit to replace our selfish spirit.  That’s what enables us to live a Christian life.

Conclusion – Donald Trump or John Lewis – who is poor in spirit?

So, who’s poor in spirit, as in what Jesus said in the Beatitudes?

Both Trump and Lewis claim(ed) to be Christians.  But one lives it out, while the other doesn’t seem to be doing so.  One lived his life for others.  The other seems to believe everyone else’s life should be lived for him.

If you’d like to do an in-depth study of The Beatitudes, what they meant to the people in Jesus’ time, how they relate to and build upon each other, please see The Beatitudes.

previousIs not testing really a good idea?
nextRevelation – The letter to the lukewarm church in Laodicea

Home » A look at ourselves » Donald Trump or John Lewis – who is poor in spirit?
a