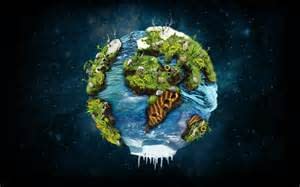 “God always forgives, but the earth does not” – according to Pope Francis.

What does this mean?

Does this mean he believes that God “prevents” the earth from forgiving?
Or maybe that God doesn’t have control over the earth, and it won’t “forgive” even if God wants it to?

Don’t get me wrong – there’s a lot to like about Pope Francis.  And in the context of what he was talking about, he had a good message.  And we’ll get into that.

But how will people interpret this statement?

We’ll get into that as well.

Here’s a little more about what the Pope said, from MSN News.  (Sorry – this article is apparently no longer available)

“God always forgives, but the earth does not,” the Argentine pope told the Second International Conference on Nutrition (CIN2) in Rome, a three-day meeting aimed at tackling malnutrition, a global scourge which afflicts poor and rich alike.

“Take care of the earth so it does not respond with destruction,” he warned representatives from 190 countries gathered for the conference organised by the UN food agency (FAO) and World Health Organization (WHO) in the Italian capital.

As for man’s greed destroying the world – it’s entirely possible.  The malnutrition across the globe – the word “possible” isn’t the right one – because it’s happening.  The article says the number of undernourished people has been cut in half over the past 20 years, about 805 million people are still affected.

Two points here.  First – 20 years is a really long time.  If you were one of the undernourished who just got out of that category this past year – even that means 19 years of hunger.  And what of the people that died during those 20 years from hunger?  In a perverse way, they drop the number of “undernourished” – because dead people aren’t hungry.  Not to be gruesome here, but it’s surprising to see a liberal news organization make this number of 805 million sound sort of like a “good” thing.  It’s nothing to be proud of.

I applaud the Pope for what he’s doing.  Bringing attention to the problem.

“It is also painful to see the struggle against hunger and malnutrition hindered by ‘market priorities’, the ‘primacy of profit’, which reduce foodstuffs to a commodity like any other, subject to speculation and financial speculation in particular,” Francis said.

That would be things like using food staples, such as corn, for energy.  Why?  Yes, using it for energy instead of food gives higher profits to the corn growers, the companies making the fuel and selling it.  The problem, on the other side of the chain – when the price of corn goes up to supply the fuel demands, it doesn’t leave the price of corn for food alone.  That price goes up as well.  Speculation through commodity markets puts it even higher.

And guess what?  People buying ethanol gas for their cars (the people in the world who can afford cars, that is) are willing to pay a whole more for that corn than the many people who eat that corn as a staple of their diet are able to pay.

But even though it’s a morally indefensible position – we do it.  For money.  And in some cases, for the environment, because some people seem to consider the earth more important than people.

So – yes – I applaud the Pope for bringing this up.   And I pray he doesn’t leave it alone.

But what about the unforgiving earth part?  I think – I hope – this isn’t what Pope Francis really meant.

To say that God doesn’t have full control over the earth and everything else in creation couldn’t possibly be what he meant, as we see in Jeremiah –

Jer 32:17 “Ah, Sovereign LORD, you have made the heavens and the earth by your great power and outstretched arm. Nothing is too hard for you.

This might be a case where Pope Francis is maybe being too politically correct?  Let’s face it, people don’t like to hear that God brings drought, famine, and other natural catastrophes to the earth.  Yes, clearly the Bible says He did that in the Old Testament.  It also talks about how He brings healing with rains and plentiful crops.  And yes, it was very much dependent on whether His chosen people followed Him or sinned against Him.  However – it also does not say that every instance of natural disaster is because of God.  There is this other character in the Bible – one we also don’t like to talk about – named Satan.  Death and destruction comes from him as well.

The thing is, as we found with Job, we mere mortals never know what causes these disasters.  It’s not right for us to declare that any one disaster is from God – because, in all likelihood, we really don’t know.

But – for someone to say that God isn’t going to sit idly by and watch His children here on earth be trampled all over – I don’t think that’s a problem.  Well, let me rephrase that – it shouldn’t be a problem.

Seven times in the first 3 chapters, Jesus tells people what they have to do to overcome the evil in the world.  And Seven times He tells what the reward will be for those who overcome.

Rev 2:7 He who has an ear, let him hear what the Spirit says to the churches. To him who overcomes, I will give the right to eat from the tree of life, which is in the paradise of God.  (the church in Ephesus)

Rev 2:11 He who has an ear, let him hear what the Spirit says to the churches. He who overcomes will not be hurt at all by the second death.  (the church in Smyrna)

Rev 2:17 He who has an ear, let him hear what the Spirit says to the churches. To him who overcomes, I will give some of the hidden manna. I will also give him a white stone with a new name written on it, known only to him who receives it.  (the church in Pargamum)

Rev 2:26 To him who overcomes and does my will to the end, I will give authority over the nations—
Rev 2:27 ‘He will rule them with an iron scepter;
he will dash them to pieces like pottery’—
just as I have received authority from my Father. 28 I will also give him the morning star.  (the church in Thyatira)

Rev 3:5 He who overcomes will, like them, be dressed in white. I will never blot out his name from the book of life, but will acknowledge his name before my Father and his angels.  (the church in Sardis)

Rev 3:12 Him who overcomes I will make a pillar in the temple of my God. Never again will he leave it. I will write on him the name of my God and the name of the city of my God, the new Jerusalem, which is coming down out of heaven from my God; and I will also write on him my new name.  (the church in Philadelphia)

Rev 3:21 To him who overcomes, I will give the right to sit with me on my throne, just as I overcame and sat down with my Father on his throne.  (the church in Laodicea)

Yes – there’s a lot of death and destruction.  But there’s also so much hope!

People are so interested in the “End Times” these days.  There’s books and movies about it.  BSF is going to do Revelation for the first time ever next year.  And yet – it’s not politically correct, in many instances, to talk about what it says.

Is that what’s happening here?

I sincerely hope not.

This Pope has a huge audience.  He’s very popular, even with non-Catholics and with former Catholics (like me).  He shouldn’t worry about being politically correct.  He should get up there and, hopefully he believes this, say that God’s going to get tired of the way we treat each other – the way we treat His children – and He is going to bring punishment.  Not directly to the earth – that misses the point.  If / when He does it – it’s going to be to us.  Maybe though the earth – maybe by bringing disaster – maybe by not healing the damage we’ve all done – but the target of His wrath can’t possibly be an inanimate object like the earth.  It’s us!  The one time we should be self-centered, and we’re blaming it on the earth!

Rev 1:1 The revelation of Jesus Christ, which God gave him to show his servants what must soon take place. He made it known by sending his angel to his servant John, 2 who testifies to everything he saw—that is, the word of God and the testimony of Jesus Christ. 3 Blessed is the one who reads the words of this prophecy, and blessed are those who hear it and take to heart what is written in it, because the time is near.

Why can’t we talk about this?  Maybe we think we can ignore Him? Do we believe In God, but we don’t believe God?

Let’s close with the end.

First – the bad news – from the end of the MSN article:

Two billion people suffer from deficiencies in nutrients such as vitamin A, iron and zinc — a condition known as “hidden hunger” by experts — while 42 million children and 500 million adults are overweight or obese.