But if you do not forgive.  That’s part of something Jesus said. 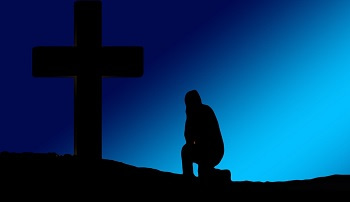 Meghan McCain, a co-host of The View, spoke on the president’s persistent attacks on her father at the Lyndon B. Johnson presidential library in Texas where she was accepting an award on behalf of her father.

Lk 11:4  Forgive us our sins,
for we also forgive everyone who sins against us.
And lead us not into temptation.

This is the part of the Lord’s Prayer that most people remember when it comes to forgiveness.  It’s short.  To the point.  But is it complete?

Remember, each of the Gospel writers had a target audience.  They had their own view of what they experienced with Jesus.  When they appear to disagree, that’s not what’s really happening.  Rather, when they seem to say different things, we need to pay attention to what’s going on.  Maybe they’re recounting two similar experiences.  Maybe it’s because one was Jewish and the other a Gentile.  In this case, putting the two passages together makes a lot of sense.

Here’s what Matthew wrote about forgiveness in the Lord’s Prayer.

I will never forgive …

Someone who says “I will never forgive …” really needs to pay attention to that last part.

It’s got to be important when Jesus says that we will not be forgiven if we don’t forgive others.  Here’s another passage from Matthew with what I believe is a related message.

OK – it talks about forgiveness.  But is says everything will be forgiven except blasphemy against the Holy Spirit.  Certainly doesn’t seem to say anything about not being forgiven because we refuse to forgive.

Or does it?  Exactly what does blasphemy against the Holy Spirit mean?  It would be convenient if it meant something like cursing the Holy Spirit.  Or cursing by using the words Holy Spirit.  Lot’s of people do what with Jesus’ name – and apparently that will be forgiven.  (Although, I’d expect that a true believer wouldn’t continue to do that.)  But who says “Holy Spirit” as a curse phrase?  Maybe, when the word holy is used with other words.

Like I said – it would be convenient.  But it would also be wrong to think it’s all about cursing.  It’s a whole lot more.

What about where Paul writes:

Or, in more details, where the author of Hebrews writes:

Heb 10:26 If we deliberately keep on sinning after we have received the knowledge of the truth, no sacrifice for sins is left, 27 but only a fearful expectation of judgment and of raging fire that will consume the enemies of God. 28 Anyone who rejected the law of Moses died without mercy on the testimony of two or three witnesses. 29 How much more severely do you think a man deserves to be punished who has trampled the Son of God under foot, who has treated as an unholy thing the blood of the covenant that sanctified him, and who has insulted the Spirit of grace? 30 For we know him who said, “It is mine to avenge; I will repay,” and again, “The Lord will judge his people.” 31 It is a dreadful thing to fall into the hands of the living God.

If you’re a Christian, maybe you think something like, “That’s all well and good, but I’m saved”.

Question:  are you really?  Are you really saved?  And I ask that because you need to ask yourself – am I really a Christian?  Do I really believe?

Becoming a believer – a Christian – isn’t as easy as saying the so-called sinner’s prayer.  Look for that prayer in the Bible.  It’s not there.  Anywhere.  Is the concept there?  Absolutely.  But nowhere does it say that reciting the sinner’s prayer is what leads to salvation.  Sorry – but it’s just not there.

One thing that is there is this:

We need to believe in Jesus.  And “believe in” actually involves much more than we might think.  It’s believe in.  It’s also believe.  Not just believe bits and pieces of what Jesus said that we like and / or agree with.  We’re to believe all of it.  Everything Jesus said.  Finally, we’re also to act on it.  Remember the Great Commission?  That’s all about going and doing something. For a brief look into that idea, please see: Why do you stand here looking into the sky?

The Work of the Holy Spirit

Let’s keep looking at the Holy Spirit – this time from John’s gospel.

Jn 16:5 “Now I am going to him who sent me, yet none of you asks me, ‘Where are you going?’ 6 Because I have said these things, you are filled with grief. 7 But I tell you the truth: It is for your good that I am going away. Unless I go away, the Counselor will not come to you; but if I go, I will send him to you. 8 When he comes, he will convict the world of guilt in regard to sin and righteousness and judgment: 9 in regard to sin, because men do not believe in me; 10 in regard to righteousness, because I am going to the Father, where you can see me no longer; 11 and in regard to judgment, because the prince of this world now stands condemned.

It’s for our good that Jesus us going away.  Yes – it’s good as in “Good Friday”.  Jesus’ death is “good” because He pays the price for the sins of those who believe in Him.  But Jesus tells us there’s even more about “good” than that.  The Counselor – the Holy Spirit – will come.  But not until after Jesus dies on the cross and ascends to Heaven.

In regard to sin and judgment, this works two ways.  For a true believer, it’s a reminder that we’ve messed up.  For the non-believer – that’s where the judgment comes in.  And that is why I raised the earlier question about whether or not someone who claims to be Christian is really a believer.

Jn 16:12 “I have much more to say to you, more than you can now bear. 13 But when he, the Spirit of truth, comes, he will guide you into all truth. He will not speak on his own; he will speak only what he hears, and he will tell you what is yet to come. 14 He will bring glory to me by taking from what is mine and making it known to you. 15 All that belongs to the Father is mine. That is why I said the Spirit will take from what is mine and make it known to you.

Now, we get into Jesus’ message for true believers.  The Spirit of truth – another way Jesus refers to the Holy Spirit – will guide the believer.  Jesus let’s us know about the importance of the often neglected third member of the Trinity.

Ultimately, we see that God really is the Trinity – Father, Son and Holy Spirit.  How and when we interact with them is something we need to learn.

Please see Jesus is my co-pilot? for an experience I had with the issue of Jesus / the Holy Spirit and my (our) relationship with them.

But if you do not forgive …

So let’s bring all this together.

I really hope you took time to read  Jesus is my co-pilot?.  What I’ve presented here, along with that article, really ties together the importance of the Holy Spirit.

Here’s the problem with quenching the Holy Spirit – and why it’s not forgiven.  When we become Christians, among other things, we claim we will follow Him.  Jesus very clearly tells us the Holy Spirit will come as our teacher, comforter, counselor, as well as a number of other functions.  Jesus also says the Holy Spirit will lead us and let us know when we have sinned.

So, let’s look at this refusing to forgive thing.  We refuse to forgive someone. The Holy Spirit let’s us know this is wrong.  You have to agree, it is wrong.  It’s in the Lord’s prayer!  If we pray that prayer and don’t even believe the words in it – it’s hard to believe we’re really a Christian.  There’s also no need to continue – given that we’re already proven to ourselves that we really don’t believe what Jesus said.

In any case, let’s keep going.  When the Holy Spirit tells us we’ve messed up by refusing to forgive someone – and then we double-down on it and continue to refuse to forgive that person – we’ve just quenched the Holy Spirit.

That is why I said the Spirit will take from what is mine and make it known to you.

When we refuse to forgive – we’ve just told Jesus, “I don’t want what is yours”.  That’s what He is telling us here.

But why make such a big deal out of forgiveness?  Why do I tie that to quenching the Holy Spirit?  Why do I say that refusing to forgive is unforgivable?

Well, for one thing – because that’s what Jesus said.  How could I sit here and write anything else?  How can I, as a Christian, argue that Jesus was wrong?  Or lied?  Or was mistaken?  The only reasonable thing to do is try to understand why what Jesus said is truth.  Why did He say it?

But then we turn around and refuse to forgive.  We’ve rejected the Holy Spirit that Jesus sent to guide us and to teach us.

In case that didn’t sink in, let me close with a repeat of that last sentence.  Please, if you’re in the position of refusing to forgive someone, read this like you’ve never read anything before:

But when we refuse to forgive, we’re saying that Jesus’ death on the cross wasn’t good enough to pay for the sin of the person that we’re refusing to forgive!