A jet for Jesus.  Sounds good, doesn’t it?  How come Jesus never thought of that? 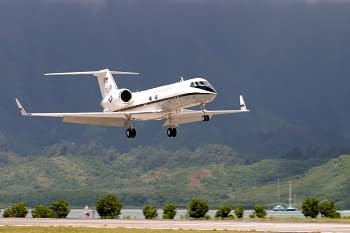 OK – so Creflo Dollar lives in a time when jets actually exist, and Jesus had the misfortune of being born too early.  But still – how about a fleet of top “Dollar” horses to get around on?  Even the Roman soldiers had good horses!

I first wrote about this back in March, 2015.  I thought it was outrageous.  Now, I need to republish for something else I’m writing.  Naturally, it seemed like a good time to see if there was anything new on this front.

The excerpt below is from May 29, 2018.  A little over a month ago.  The headline from the Washington Post reads:

A televangelist wants his followers to pay for a $54 million private jet. It’s his fourth plane.

Of course, it’s totally justified.  Well, it’s justified in the mind of the televangelist who wants it.

If Jesus were to descend from heaven and physically set foot on 21st-century Earth, prosperity gospel televangelist Jesse Duplantis told his followers, the Redeemer would probably take a pass on riding on the back of a donkey: “He’d be on an airplane preaching the gospel all over the world.”

And Duplantis thinks the Light of the World wouldn’t exactly settle for 30 inches of legroom or getting patted down by TSA.

Why would He choose anything less than the Falcon 7X, a private jet that nears the sound barrier but also has noise-limiting acoustic technology, a Bluetooth-enabled entertainment center and an optional in-flight shower?

Duplantis, saying he needs about $54 million to help him efficiently spread the gospel to as many people as possible, has asked the Lord — and hundreds of thousands of hopefully deep-pocketed followers across the world — for just such a plane.

Really?  Forget the plane.  Would Jesus even be preaching all over the world?  NO!!  He didn’t do it when He was alive.  Why would He do it any differently now?  Remember the Great Commission?

Mt 28:18 … “All authority in heaven and on earth has been given to me. 19 Therefore go and make disciples of all nations, baptizing them in the name of the Father and of the Son and of the Holy Spirit, 20 and teaching them to obey everything I have commanded you. And surely I am with you always, to the very end of the age.”

The plan wasn’t for Jesus to reach everyone Himself.  It was for His followers to do it.

The article goes on:

“It is his mission to reach every soul of the 7 billion people that now inhabit the earth, making sure that each one has an opportunity to know the real Jesus — approachable, personable, compassionate, and full of joy-the way that he knows Jesus,” the biography says.

He preaches the prosperity gospel, which says God shows favor by rewarding the faithful with earthly riches. Giving money to pastors and their ministries, leaders say, is a sort of investment.

And just in case you’re wondering, the Great Commission wasn’t for ONE of His followers to do.  It was a task for all of us.  No airplane needed.  Well, no airplane needed for most of us.  I do know some people who fly into remote areas to do God’s work.  However, they do it with their own planes on their own time.  No church money needed.

BTW – Creflo Dollar did not get his plane.

In any case, I highly recommend the article in the Post.  It also identifies other televangelists, claiming to go God’s work, and their attempts to get airplanes.  Sadly, some are successful.

I’m pretty sure Jesus would have a very different view of the money spent on planes, jet fuel, runway expansions, Etc.

Mk 10:17 As Jesus started on his way, a man ran up to him and fell on his knees before him. “Good teacher,” he asked, “what must I do to inherit eternal life?”

Mk 10:18 “Why do you call me good?” Jesus answered. “No one is good—except God alone. 19 You know the commandments: ‘Do not murder, do not commit adultery, do not steal, do not give false testimony, do not defraud, honor your father and mother.’’”

Mk 10:21 Jesus looked at him and loved him. “One thing you lack,” he said. “Go, sell everything you have and give to the poor, and you will have treasure in heaven. Then come, follow me.”

Mk 10:22 At this the man’s face fell. He went away sad, because he had great wealth.

Can you imagine all the good that “jet money” could have done for the poor?  That is, as long as the televangelists with the money actually sold their planes.  What do you think?  Would they sell the planes and give all of the money – every penny – to the poor?  Not even charge an administrative fee?  Or would they turn around and walk away from Jesus?

Back to my original article – A Jet for Jesus

Today’s televangelists live in a time when jets actually exist, and Jesus had the misfortune of being born too early.  But still – how about a fleet of top “Dollar” horses to get around on?  Even the Roman soldiers had good horses!

Think about it.  It would have been so much easier for Jesus to get around.  Instead of passing around baskets of bread and fish for people to take and eat – Jesus could have been collecting their last pennies to pay for His horses.  What was He thinking?

And when it came time to get away from the people, Jesus wouldn’t have to rely on tricky miracles to “slip away”.  He and His gang of disciples could have just hopped on the horses and sped away.  Again – what was He thinking?

And then there’s the golden opportunity that He not only passed on – but ruined!  Instead of taking over the operation of the money changers in the synagogues – He actually threw them out!  Think about how many horses that would have bought.

And to top it all off – with the horses – Jesus could have gotten around faster – not wasted so much time walking from one place to another – and could have collected even  more money!

If today’s televangelists had been around back then – things might have been much better.  Or not.  How about worse?

Just something for all the prosperity gospel folks to think about.  Or not.