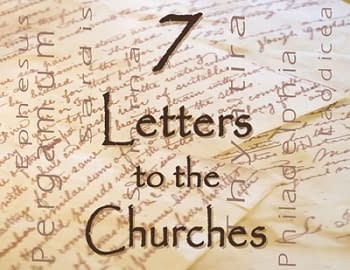 I know – there aren’t any parables in Revelation. This will be the last part of the inroduction – but it’s important, so bear with me.

BTW – of you haven’t checked out the earlier parts yet, they’reon the menu to the left.

The Parable of the Sower

Mt 13:1 That same day Jesus went out of the house and sat by the lake. 2 Such large crowds gathered around him that he got into a boat and sat in it, while all the people stood on the shore.

Mt 13:3 Then he told them many things in parables, saying: “A farmer went out to sow his seed. 4 As he was scattering the seed, some fell along the path, and the birds came and ate it up. 5 Some fell on rocky places, where it did not have much soil. It sprang up quickly, because the soil was shallow. 6 But when the sun came up, the plants were scorched, and they withered because they had no root. 7 Other seed fell among thorns, which grew up and choked the plants. 8 Still other seed fell on good soil, where it produced a crop—a hundred, sixty or thirty times what was sown.

You may be wondering, what does this have to do with hype cycles?

Remember – the entry point into the hype cycle is Jesus. And then things although at different speeds and to different degrees for different people.
But – not everyone actually makes it through the whole cycle. Some fall out of it very, very quickly. And that’s what this parable is about.

When we are in the infant stage – when we are still seeking Jesus – wanting to know more but not far enough along to sustain without more growth – things don’t always go well.

In the case of the seeds that fell along the path – that represents someone who doesn’t really even get started. They don’t get even a little bit up the first slope of the cycle. Some thing / some one comes along and the person get sidetracked and never even has a chance to know even a little about Jesus.

Then comes the seeds that fell on rocky places – grew quickly – and then were scorched. 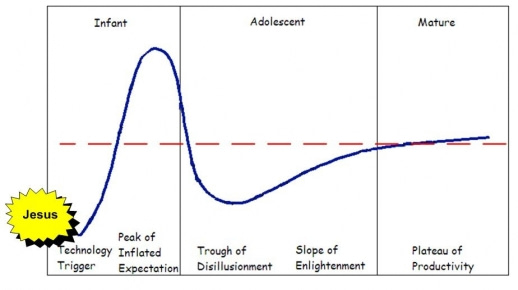 That could be someone who shot up the first slope really quickly – too quickly – and went right off the chart. Never had a chance to mature – just literally and figuratively burned out. Neither of these made it past infant stage. That sounds odd for a God that loves everyone. And yet – as Jesus said in Matthew 26:26-29:

Mt 26:26 While they were eating, Jesus took bread, gave thanks and broke it, and gave it to his disciples, saying, “Take and eat; this is my body.”

Mt 26:27 Then he took the cup, gave thanks and offered it to them, saying, “Drink from it, all of you. 28 This is my blood of the covenant, which is poured out for many for the forgiveness of sins. 29 I tell you, I will not drink of this fruit of the vine from now on until that day when I drink it anew with you in my Father’s kingdom.”

The final two then – the seeds that end up in the vines, as well as the seeds that fell on good soil – they at least have a chance to get out of the infancy stage.

And so now we’re ready for Revelation. And finding out what happens to the “seeds” that fell in all four areas – which of course is a way to describe everyone who is – has been – and will be on the face of this earth. God has offered salvation to all of us – but only those who successfully make it through the hype cycle – who achieve a relationship with our Savior, Jesus – are guaranteed that salvation.

When I taught a class on this, it became obvious that the explanation above was too short, so I’m going to expand it and try to make it more clear.

What neither can adequately show is that, at any time, someone can launch right off the chart – literally.  On the way up – it’s not certain that a peak will be reached and the line will start to slope down.  It is possible to continue to get so far beyond what Jesus is really about that the chart’s no longer relevant.  We’re so far from Jesus that a return to something even close to His real mission is impossible.
It;s also possible, on the way down, to become so disillusioned that we just give up.  Off the chart.

The ideal place to be in on the dotted red line – as long as one is there for the “right” reason.  In the process of going up or down – it’s possible to appear to pass through the red line – but not really be in the “right” place.  Just because we go from expecting nothing from Jesus (like at the beginning) to expecting too much (at the peak if inflated expectation) – doesn’t mean we ever truly knew what Jesus was about.  It’s just an illusion created by the 2-D drawing that it looks like that line was crossed.
Towards the end of the line – after the trough of disillusionment – as the dotted red line is approached – that’s the place to be.

One other thing that can’t be shown is that due to external circumstances (maybe Satan) – we go backwards.  Maybe we follow the line – maybe we just plain jump back to as earlier step in our relationship.  It can happen at any time.  And we can revert to any point.  We could even “revert” back to a point on the chart where we never were before.  The concept is that it’s not always true that we will move forward – not always maturing.  Things can happen that shake our faith so badly that we go back to the infant or adolescent stage.

With that in mind, you may want to go back and reread this page again to be sure you understand the concepts.

We” proceed with placing the churches in Revelation, your church, even you – on the chart.