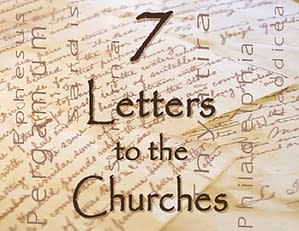 Before getting into the Seven Letters, it seems like a good idea to look at the beginning of Revelation – the first chapter – which consists of three parts.  I didn’t do this when I first wrote the series.  It didn’t seem necessary, because I wasn’t planning on getting into any of the imagery in the letters.  It was only supposed to be about the reaction we have to what was in the letters.  However, when I used them in a class, people were asking about things like the lampstands, the stars, the angels, Etc.  So  this time – I’m going to do this introduction to take care of those kinds of questions right at the start – and hopefully allow for more focus on the human response / reactions to the seven letters.

In case you’re not familiar with the word “prologue”, here’s what it means – from dictionary.com

The prologue is only three verses, but they do set the scene for what’s coming in the rest of the book of Revelation –

Rev 1:1 The revelation of Jesus Christ, which God gave him to show his servants what must soon take place. He made it known by sending his angel to his servant John, 2 who testifies to everything he saw—that is, the word of God and the testimony of Jesus Christ. 3 Blessed is the one who reads the words of this prophecy, and blessed are those who hear it and take to heart what is written in it, because the time is near.

Before going any further, I need to point out that verse 3, in many new translations, is not clear.  It can easily be thought to mean something that it really wasn’t meant to portray.  The way the sentence is written, it seems like the following things are in it –

The problem comes up partly because of the way the sentence is constructed, and partly because somewhere along the line the rules for the placement of commas was changed – leading to many ambiguous and often misleading sentences.

To clear this up, let’s go to another translation – one that’s literal –

3 Happy is he who is reading, and those hearing, the words of the prophecy, and keeping the things written in it  [1]Young, R. (1997). Young’s Literal Translation (Re 1:3). Bellingham, WA: Logos Bible Software.

With that in mind – let’s look at some individual words / phrases to see specifically what each of them means,  With all the imagery that exists in this book, it’s really important to understand it – as best we can – what the intent of this book.

Besides just the title of the book, here’s what revelation means –

From dictionary.com, we see the common meaning in an ordinary, non-religious, conversation –

However, when we look at a biblical definition, we see something much more specific and intense –

Revelation. Term from the Latin revelatio, referring to either the act of revealing or making known, or the thing which is revealed. In theology it designates God’s own self-disclosure or manifesting of himself, or things concerning himself and the world; it may also mean the word itself, oral or written, which bears such revelation. The equivalent NT terms are apokalupsis (apocalypse), which means unveiling, uncovering, or making someone or something known. It can also mean the word itself which reveals.  [2]Elwell, W. A., & Beitzel, B. J. (1988). Revelation. In Baker encyclopedia of the Bible (Vol. 2, p. 1844). Grand Rapids, MI: Baker Book House.

Interesting, isn’t it, that the end of the world isn’t mentioned here?
It’s also interesting to see the dictionary.com definitions for the word apocalypse –

1. (initial capital letter) revelation (def 4).
2. any of a class of Jewish or Christian writings that appeared fromabout 200 b.c. to a.d. 350 and were assumed to make revelations of the ultimate divine purpose.
3. a prophetic revelation, especially concerning a cataclysm in which theforces of good permanently triumph over the forces of evil.
4. any revelation or prophecy.
5. any universal or widespread destruction or disaster: the apocalypse of nuclear war.

On top of that, in the movies, the hero saves the world.  And things return to normal – the world as it was before.  Nothing new.  Of course, someone dies – someone who was involved in trying to save the world.  Chances are that some innocent people die too.  Just like in the book of Revelation.  Oh – there are a couple differences though.  It’s the world as we know it that continues on – not the new world, as God intended it to be.  And it’s the human hero who dies to “save” people, so their lives can continue as they were – not Jesus who died, so people can have eternal life the way God intended it to be.  So again, God is removed.  “Did God really say …?”

The bottom line, for us, is that revelation means a disclosure from God.  In the case of the last book of the Bible, it happens to be the end of the world, as we know it.  Just as important, if not more important, is that it’s also the new beginning of the world.  The world that Jesus died so we could experience it with God.

This revelation is from Jesus.  That seems so obvious, but it’s something I need to point out.  Later, when we look at the rest of this verse, it will be important to remember that it’s Jesus giving this revelation to John.  That helps to keep track of “him”, “his”, and “his” as we go through the verse.  Some disagree as to who’s who – but I think it becomes (more) clear when we realize this is a prophecy given by God, to Jesus (to show Jesus’ servants).  Further, Jesus made it know to those servants by sending an angel to John (with this vision), and John will tell everyone else.

God (The Father) gave this revelation to Jesus

… to show his servants …

… what must soon take place …

know what was for certain going to place

… He made it known by sending his angel …

Jesus made it known by sending an angel

to His follower John

… 2 who testifies to everything he saw—that is, the word of God and the testimony of Jesus Christ.

and John is now telling everyone else.

Just a quick note here on what is meant with the word “soon”, as in what must soon take place

“Soon”, doesn’t necessarily mean “soon” the way we think of it – meaning it’s not necessarily what we would consider “a small period of time will pass” before these events take place.

For one thing, we need to consider how the passage of time is considered by both us and by God.  This passage from Peter is especially relevant to the discussion of time in this circumstance –

2Pe 3:8 But do not forget this one thing, dear friends: With the Lord a day is like a thousand years, and a thousand years are like a day. 9 The Lord is not slow in keeping his promise, as some understand slowness. He is patient with you, not wanting anyone to perish, but everyone to come to repentance.

While it’s obviously a relative time frame Peter is talking about, even if one insists on taking it literally, that means God could conceivably look at out time today as having been about 2 days after this prophecy was given to John.

In any case, the very next verse reveals another important thing about what is meant by soon –

2Pe 3:10 But the day of the Lord will come like a thief. The heavens will disappear with a roar; the elements will be destroyed by fire, and the earth and everything in it will be laid bare.

Jesus spoke of the same thing – coming like a thief.  It’s the concept of all of a sudden – and when it does come, it will come quickly.

To show that, let’s look at the two Greek words that are translated as the single word “soon”.

In other words, God the Father knows when this is going to take place.  When He was on earth, Jesus did not know.  Whether He knows the exact time or not when the revelation is given to John, we cannot tell.  John certainly wasn’t told the exact time,  Regardless – Jesus can still pass on what is for certain going to happen – at the time the Father knows it will happen.

The Day and Hour Unknown

As we see this backs up the statement that when it does happen, it will be all of a sudden, with no warning.

Now, let’s get to the next verse –

We have already looked at what this means – that whether it’s the one reading, or the one listening – these are words to live by.

the time is near

The first – soon – is about when the events will take place, with God causing them to take place at that time.

The second – near – is about how we, the believers, are to act – since the time is near.

Given that this is a message for us, and we don’t know when the time is really coming, we need to live like at any given second – it could come in the very next second.  We can’t rely on trying to tell ourselves that we’ve got time, so we can wait – for example start living like we should at age 40.  There are two problems with that.  One – we might not live until 40 – and then we’d be forever lost, since we never had a chance to follow Jesus.  Second – the time could come when we’re only 39 – and then we’d also be too late, although for a different reason.

No – we must treat this like it could come at literally any moment.  That, by definition, makes the time “near”.

As I’ve pointed out, depending on the Bible translation you’re reading – or listening to – may be more than a little confusing about the blessings. While doing the research to clarify this, I found this additional insight into the blessings –

The recipients (his servants) were expected to receive a blessing through this revelation. Blessed is the one who reads the words of this prophecy, and blessed are those who hear it and take to heart (1:3) those words. As the letter made its rounds through the addressed churches, it was expected that a person would read the book to a group of hearers. The blessing should fall on both reader and hearer, but with the hope that the hearers take it to heart. The actual use may have been as a sermon, or, better still, as a liturgical format for worship in the early Church.
John gives his readers a blessing at the beginning of this book. Because of the perspective of doom that many interpreters bring to the book of Revelation, this repeated benediction is often overlooked. Some have even detected a hidden series of seven such blessings in the book as a whole.

We would notice how many of these “blessings” are connected with the need to follow the ethical demands of the prophecy in this book.  [6]Eckley, R. K. (2006). Revelation: a commentary for Bible students (p. 59). Indianapolis, IN: Wesleyan Publishing House.

The point here is to show how these blessings (from the book of Revelation) relate to living out our lives as true followers of Jesus,

I may get into the blessings in another article, but I fear this one is already pushing the limits of reasonable attention spans.  And this is only three verses!

the next installment of this series will continue with