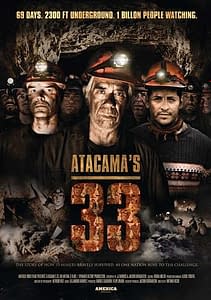 In 2010, the eyes of the world turned to Chile, where 33 miners had been buried alive by the catastrophic explosion and collapse of a 100-year-old gold and copper mine. Over the next 69 days, an international team worked night and day in a desperate attempt to rescue the trapped men as their families and friends, as well as millions of people globally, waited and watched anxiously for any sign of hope. But 200 stories beneath the surface, in the suffocating heat and with tensions rising, provisions—and time—were quickly running out. A story of resilience, personal transformation and triumph of the human spirit, the film takes us to the Earth’s darkest depths, revealing the psyches of the men trapped in the mine, and depicting the courage of both the miners and their families who refused to give up. Based on the gripping true story of survival—and filmed with the cooperation of the miners, their families and their rescuers.

I underlined some of the text from an ad for the movie – The 33.

The question is – where did this courage, resilience, and transformation come from?

In other words, what is the triumph of the human spirit all about?

One of the most telling scenes from the movie about how to answer that question had to do with believing what we choose to believe.  One of the lines in that conversation is from Mario (the character played by Antonio Banderas) –

I believe we’ll make it out of here because I choose to believe it.

But then that begs another question – where does that belief come from?
I suppose the answer to that is somewhat circular – in that it comes largely from things we already believe.

So – where do I think the “triumph of the human spirit” came from in the movie?

When things are looking really bad – like nothing’s going to happen (but of course we know exactly what did happen) – a “coincidence” occurs.
The minister of mining is talking to one of the family members – and something comes to him because “we learn from our mistakes”.

What coincidences are about depends on what you choose to believe about them.

I read one time that coincidences are God acting anonymously. Well – from that conversation the mining minister coincidentally gets the answer to the problem of how to reach the miners.
The “human spirit” all on it’s own?  Or the “human spirit” bolstered by the “Holy Spirit” to learn from the previous drilling mistakes and reach the miners on the very next drilling attempt?

One interesting thing portrayed in the movie has to do with what happens after rescue seems likely.  It’s like a circus – a phrase from the movie – above ground.  People are even selling souvenirs.  God seems to be disappearing from the conversation.  Below ground – the same is happening.  No more praying – it’s down to conflicts between the men.

God is being forgotten.

And isn’t that something we all do.

So now the big question – where did the strength of the “human spirit come from?

Was it from the people themselves – all on their own?

Was it from the God that they seem to be forgetting about?

Will they learn from the mistake of forgetting about God?

For them – they needed God one more time before the miners could get out.  The very first attempt at getting one of the men above ground in the capsule looks like it’s going to fail.  It gets stuck.  The “human spirit”, by itself, isn’t enough.  More praying.  The second attempt goes fine.  As do the remaining 32 rescues.

Did they learn from their mistake of forgetting God?

As the very last miner was being rescued, we see the writing on the wall –

God was with us

So the question –
Has anyone who’s seen the movie learned anything?

Yes, we will believe what we choose to believe.

But we’re also capable of learning.

And when we learn – God is more than willing to acknowledge that and welcomes us back to Him.

Ps 51:10 Create in me a pure heart, O God,
and renew a steadfast spirit within me.
Ps 51:11 Do not cast me from your presence
or take your Holy Spirit from me.
Ps 51:12 Restore to me the joy of your salvation
and grant me a willing spirit, to sustain me.

Ps 51:13 Then I will teach transgressors your ways,
and sinners will turn back to you.

Those words are from David, who screwed up big time.  Did something that was totally wrong in the eyes of God.  But David turned back to God – and David was greatly blessed by God.

we learn from our mistakes

We can also choose to learn.

The thing is, when do / will we learn?

But for us, if our lives aren’t on the line – will we learn?

Our souls are on the line.  But again – we don’t see that either.  It’s the spiritual part of us.

Fortunately, we have the Bible to teach us.  But too many look at it as outdated rules that don’t apply anymore.  Or fairy tales that never did apply to anyone, but were a way to keep people in line, or contented, or be comforted – or those same words are considered by some to be scary, damning, and written to prevent anyone from having fun.  If we take it for what it claims to be – examine it and realize that it really is being proven (by things like history, archaeology, science) to be exactly what it claims to be – we could learn from it.

We also have events that happen like what these men went through.  They did face a time when their lives were on the line.  They are “today” – not some thousands of years old event that’s got nothing to do with us.  They aren’t some future that may or may not ever happen.  They are real people who faced the conditions necessary to force a look at our own mortality – with a very real sense of any minute could have been their last – and decided for God.  We could learn from them.

Have you learned anything?