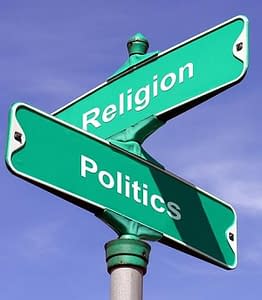 They concluded that many Christians left the church because of the church’s active affiliation with conservative politics.

You’d better believe it!  On both sides.

But the issue I have is why “the church” aligns itself with either side of politics.
And since they do, why isn’t everyone upset about something related to this?

BTW – did you notice how “my opinion” became fact?
Just checking to see if you’re paying attention.

Jumping to the conclusion of one section of the book, we read –

What Hout and Fischer’s conclusion warns us is that there may be a substantial cost for the church to play politics—we lose people. Quite possibly, the church would be bigger now without its prior foray into politics.

Sounds reasonable – again, in my opinion.

But earlier in the same section, they also wrote –

Analyzing data from the General Social Survey, they found that the increases in religious disaffiliation happened among political liberals and moderates who had relatively weak ties to the church. Disaffiliation did not increase for political conservatives. They concluded that many Christians left the church because of the church’s active affiliation with conservative politics.

If this statement is really true – it raises some interesting questions for me.  And hopefully for you.

Let’s get one thing out right away.  I consider myself a conservative Christian – and have been a registered republican all my life.
Before you immediately condemn me – please read on.  I’m actually going to question all sides of this issue and ask how they (we) can do what they (we) are doing.

The assumption of the authors is that these Christians left their church because of conservative political agendas within their church.  Certainly, the biggest of these is likely to be what has come to be known as “a woman’s right to choose”, or the even more misleading name of “women’s health”.  We all know, it’s really about abortion.

Given this, which these liberal Christians should believe –

The Little Children and Jesus

Or, what about this –

So it’s not just “murder” – which takes away the question of when does life begin.  It’s even the thought of calling someone a fool.  One has to question – what does this mean when it comes to saying that the “unborn” child in the womb isn’t worthy of ever having a life?  How much of a fool could that person have been if they were allowed to live?

The questions of exceptions and whether or not this should be put into law will come up in the conservative section of this post.

Given that this is almost certainly the single most inflammatory issue with liberal Christians and the church –
and that Jesus love of children (and life) is what it is –
why should any of these things make people leave the church?

Unless their politics is more important than their salvation?

Question – is there another way?

If you fall into this group – the question is a bit different.
How do you feel about issues such as the one below –

Lk 18:18 A certain ruler asked him, “Good teacher, what must I do to inherit eternal life?”
Lk 18:19 “Why do you call me good?” Jesus answered. “No one is good—except God alone. 20 You know the commandments: ‘Do not commit adultery, do not murder, do not steal, do not give false testimony, honor your father and mother.’’”
Lk 18:21 “All these I have kept since I was a boy,” he said.
Lk 18:22 When Jesus heard this, he said to him, “You still lack one thing. Sell everything you have and give to the poor, and you will have treasure in heaven. Then come, follow me.”

Yes – there are all sorts of things that the liberals in government try to do to help the poor.  Whether they actually work, and the motivation behind some of these programs isn’t the issue here.  My questions is directly related to who provides that help to the poor.  The Bible teaches that it should it be us – His followers.  For instance –

Lk 11:39 Then the Lord said to him, “Now then, you Pharisees clean the outside of the cup and dish, but inside you are full of greed and wickedness. 40 You foolish people! Did not the one who made the outside make the inside also? 41 But give what is inside the dish to the poor, and everything will be clean for you.
Lk 11:42 “Woe to you Pharisees, because you give God a tenth of your mint, rue and all other kinds of garden herbs, but you neglect justice and the love of God. You should have practiced the latter without leaving the former undone.

The issue comes down to what does “give what is inside the dish to the poor” mean?  It’s obvious that there’s some sort of difference between what we show on the outside versus what’s inside of us.

On the outside – being in favor of supporting the poor is a good thing.  But when Christians support having this done by the government, does that become the inside versus outside issue that Jesus raises?  There’s a limit to taxes – even if we think they’re too high.  Plus – we also generally try to keep our taxes as low as possible by whatever means possible.

This becomes a problem when we look at “give what is inside the dish to the poor“.

If one looks at the Greek text, the first clause of Luke 11:41 could be translated differently: “But give to the poor those things that are within your control (or at your disposal).” Could this go well with the next clause: “and everything will be clean for you”? It might: this would not be the only text in the Bible to imply that giving to the poor is a means of ethical purification.
Kaiser, W. C., Jr., Davids, P. H., Bruce, F. F., & Brauch, M. T. (1996). Hard sayings of the Bible (p. 470). Downers Grove, IL: InterVarsity.

I support taking care of the poor – as long as it’s done through government taxes, where there’s an absolute cap on how much I have to give AND there are plenty of loopholes and exemptions for me to take advantage of and thereby keep my contribution to the poor as small as possible.

Sounds more like keeping the outside of the cup clean, but leaving the inside dirty.

Especially when one considers that if this is done through the church, ten percent is the minimum requested – and there’s no maximum at all.

So the question for the liberals who stay with their church – are you OK with this, or do you think there’s an issue with it?

According to the survey, this group is very small – or pretty much non-existent.

But still – for the few who have left – what are you doing about the things that made you want to leave?
Are you going with the government approach to taking care of things and leaving God to others?
or ???

First – I promised to revisit the “women’s right to choose” / abortion issue here.
My questions for those who stay –

1. Are you OK with those who say their should be no exceptions – that the circumstances don’t matter at all, no matter what? And do you really think this should be part of our legal system?  What happened to forgiveness, when the circumstances are very difficult and a hard choice really needs to be made – like between the life of the mother and the life of the child?  Do you realize the unintended consequences of some of these laws?  Like abortions going back to the way they used to be – where it was done in unhealthy and unsafe environments, putting both the mother and the baby at risk?  Are you doing everything you can to support alternatives – or are you just anti-abortion and the women need to just “deal with it”?  It’s not easy.  No matter how much we want it to be – it isn’t.  Making it someone else’s problem kind of goes back to the difference between cleaning the outside of the dish, but leaving the inside dirty.

2. How can you support “conservative” politicians / “mouthpieces” who want to keep the minimum wage very low?  Especially the ones who say that some people don’t deserve to make more than a few dollars an hour?  Do you realize this translates into –

Some people just aren’t worth enough for them to be able to even live at a subsistence level? Their contribution to the world is so low that they don’t even have enough value to be able to afford to take care of themselves, let alone have a family?

I ask you – does that sound like something Jesus would say?  Everyone is a creation of God.  Are we not all worth being able to live?  Just how dirty is the inside of the dish?

3. And we haven’t even talked about the unholy alliance between those who support all kinds of wars generally being “conservative” and on the same political side as many Christians.  Would Jesus support wars?  He didn’t in His own lifetime.  He was concerned about the Kingdom of God – not about being a king here on earth to overthrow the Roman government.  And yet – the church did eventually bring an end to the brutality of the Roman government – because the emperor converted to Christianity.  But now – rather than prayer and letting God work through us – we turn to wars to force people to “believe” what we believe.  What’s wrong with this picture?  And isn’t the inside of the dish getting even dirtier?

In the 1980s and 1990s, high-profile evangelical leaders snuggled up with Republican politicians under the banner of the Moral Majority and Christian Coalition. This drove away more liberal members of the Christian church who were at odds with their leaders’ conservative agenda. In the current decade, most prominent evangelical leaders in America, such as Rick Warren and Bill Hybels, have not actively supported a given political party, and this might have slowed the rate of religious disaffiliation.

There’s an unholy alliance between Christian churches and political parties.

In His time, Jesus silenced the Jewish leaders –

When we compromise our faith to support political party agendas that go against our Christian beliefs, are we not failing on the first and greatest commandment?  Are we failing to love God with all our heart, soul and mind?  Are we maybe even loving our political party more than we love God?  And for some of the things that we end up supporting – would we want the government to do to us the very same things we want that government to do to others – like the poor?

I think it’s time we get back to …

… and see where that takes us.

For much more on the topic of politics and religion, please see these series on my other site: