The last several years I’ve really, finally, come to trust in God’s peace.  Living with cancer makes it very important to have that peace.  Over the years, I’ve written quite a bit about how I’ve learned about God’s love through my dogs.  There’s such a level of dependency on their part for their humans.  And love.  So many things that I see in their interaction with me that remind me of how I should interact with God.  I don’t want to repeat everything from the other articles here – it would be too long.  But I do encourage you to check out some of the past writings.  Especially Little Replicas of God (Part 1) and (Part 2) as well as the first two I wrote about being diagnosed with cancer in Each day has enough trouble of its own and Trust in God; Trust also in me – especially with cancer. 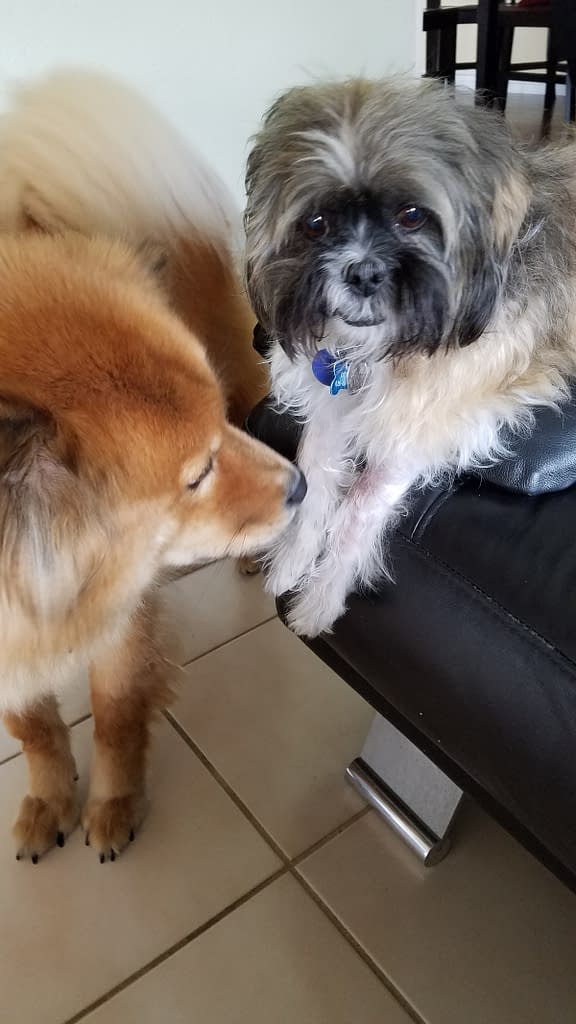 This one’s going to be about Dewey and me.  His experience going through chemo when he had lymphoma and mine as I’m in active surveillance.  Monitor and see what happens, but so far no treatments.

Dewey is the little Shih Tzu.  Hachiko is one of his “brothers”, probably a Chow Chow – German Shepherd mix.  Hachiko is checking out the shaved area on Dewey’s leg where he got his Chemo treatment earlier in the day.

Unlike people, me included, who often don’t know what to say in a situation like this – Hachiko had no problems going right over to check it out.  You have to know, Hachiko was badly abused before he came to us.  He was afraid of literally everything.  But his concern for his brother took over, and he went right away to see what was happening.

The other thing about that moment, dog’s don’t like to show weakness.  That’s especially true in Dewey’s case, since he was the alpha among the three of them.

Yes – Dewey was much smaller, but I helped him out with that.  Hachiko was too big and too strong to have him be the leader of the pack.  So I trained all three of them to learn their places.  Dewey was the leader before Hachiko arrived on the scene.  So I used food to be sure they learned the order was going to be Dewey, Donnie (a little guy, probably Havanese) and then Hachiko last.

It worked.  And I think that’s one of the things that made this moment possible.  It’s also probably the only reason we were able to keep all three of them.  But this moment in particular, Dewey allowing the much bigger dog to examine his wound from chemo, was a really big deal.

Dewey lived about eight months after his diagnosis.  That’s the equivalent of about four to five years in “people time”.  And he loved nearly all of the moments in that time.  He loved going to the vet’s office.

Getting chemo – he’d walk back with them from the waiting room and not even look back.  Why not?  Because even though he had a needle in his leg for up to an hour – he was getting attention the whole time.  I got to visit him during the process once.  He was laying there, just taking in all that attention and having a good time.

Going for blood tests and ultrasounds?  No problem.  More attention.

Sometimes it took up to an hour to drive to the cancer clinic, depending on traffic.  He’s stand at the open window (attached to his “sky box” so he could get his head just outside but not be able to jump out) taking in all the sights and smells.  That was for pretty much the entire trip.  On the way back, he’d do that as long as he could, but eventually, he would get tired and lay down.  But the desire to enjoy what he could always won out.  And then he’s be all excited when we got home.

There were a few times when the chemo got to him.  But as soon as his stomach was better, he was right back to normal.

When we were home, he knew my routine so well that if I got up to do something, he’d be waiting for me – knowing where I was going to go.

Such a level of trust.  Like he knew whatever was going to happen was OK, as long as I was there.

It was the same for Hachiko and still is for Donnie.

It’s the way it should be for us and God as well.

My first six months with cancer.

Just over six months ago, I was diagnosed with cancer.  The genomic testing from the biopsy said I could wait for treatment and go into what they called active surveillance.  Part of the active surveillance is a rotation between biopsies and MRI’s.  According to the biopsy, as I said, it was reasonably safe to go into the surveillance mode.  They give the percentage chance that the cancer will spread beyond where it is, then you make your decision whether to remove it, treat it, or wait.  I chose to wait.

The thing is, years ago I think that waiting would have driven me crazy.  So much uncertainty.  Fear and anxiety.  And that would lead to depression.  Which would then lead to a desire to die.  Thoughts of suicide.  That’s the way I was.

It’s only through what we Christians call heart knowledge that those things can be overcome.  Seeing my “kids”, the dogs, what they went through and how they react to me and trust me – that’s a real living example of what we should be like with God.  Not that they’re people and I’m God.  But as I noted with Hachiko in a couple of things I wrote – the experiences are like “little replicas of God”.

My experiences with people haven’t been good.  I have a really hard time trusting people.  Incredibly hard.  So for me, seeing something like Dewey, what he went through and how he enjoyed those last months so much, and how he trusted me so much to care for him – it gives me something to compare me and God.  Something I will never be able to do with my father – even though the father example is what we ideally have.  But I don’t.  And so, I feel like God put all my little guys in my life to help me.  To prepare me.  To be able to interact with other people, for one thing.  But to get through this as well.

These last six months could have been an absolute disaster.  But they weren’t.

As Christians, we talk about a peace beyond understanding that we can have from God.  It comes from the passage below.

Phil 4:2 I plead with Euodia and I plead with Syntyche to agree with each other in the Lord. 3 Yes, and I ask you, loyal yokefellow, help these women who have contended at my side in the cause of the gospel, along with Clement and the rest of my fellow workers, whose names are in the book of life.

Phil 4:4 Rejoice in the Lord always. I will say it again: Rejoice! 5 Let your gentleness be evident to all. The Lord is near. 6 Do not be anxious about anything, but in everything, by prayer and petition, with thanksgiving, present your requests to God. 7 And the peace of God, which transcends all understanding, will guard your hearts and your minds in Christ Jesus.

Phil 4:8 Finally, brothers, whatever is true, whatever is noble, whatever is right, whatever is pure, whatever is lovely, whatever is admirable—if anything is excellent or praiseworthy—think about such things. 9 Whatever you have learned or received or heard from me, or seen in me—put it into practice. And the God of peace will be with you.

7 And the peace of God, which transcends all understanding, will guard your hearts and your minds in Christ Jesus.

When our minds are on Jesus, our hearts are guarded.  Guarded from things like fear and anxiety.  Guarded from thoughts like I want to die.  And then we can continue on with the mission God has for us on this earth.  Maybe even more strongly than before.  Because when we go through difficulties and remember to focus our hearts and minds on Jesus, we are also probably more focused than when things are going well.

That’s why Paul can write: Phil 4:4 Rejoice in the Lord always. I will say it again: Rejoice!  Without the peace from God, who would even think of rejoicing when we have troubles.

But when we remember – 6 Do not be anxious about anything, but in everything, by prayer and petition, with thanksgiving, present your requests to God – how can we not rejoice?  No anxiety!  Because we pray to the Creator of everything.  And not just pray, but with thanksgiving.  Because we can be sure that, no matter the ending in this life, the next one will be amazing beyond anything we can ever imagine.

And all that allows us to realize that we can continue on with our mission for God.  Maybe actively, as I am now.  Maybe quietly, as an example of God’s peace when we can no longer be active.  Regardless, we are examples of how to live as Christians.  We are that light on a hill.  And we have God’s strength and His peace to do that.

And so now I continue to pray.  I tell people, if you want to pray for healing for me, by all means, go for it.  But whether it’s healing, continued surveillance, or active treatment in six months, the thing I pray for the most is to remain in God’s peace.

And for you, I pray that if you don’t have God’s peace yet, that you find it.  It truly is beyond understanding!