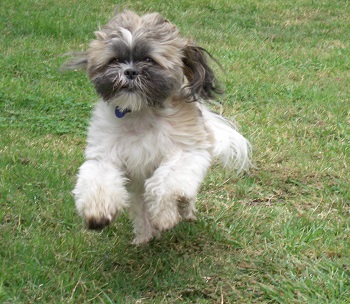 Dewey would be proud of me.
So would someone else – but first – Dewey.

I had surgery Monday.  It was the third time for me.

The first was when I was a kid having my tonsils removed – probably 50 some years ago, to give you a time frame and an idea of what the “state of the art” was back then in the ’60’s.  I only remember two things from that experience.  One was that apple juice never tasted good again.  The other was that mask coming down on my face while laying on the operating room table.  I was screaming – probably kicking too.  It was a scary experience.   🙁

The second was a few years ago.  Because of my only previous experience – and because I have “white-coat-itis” (great fear of doctors), I wasn’t expecting anything good.  Actually – was expecting everything bad.  But, the only thing I remember from that one was the warm towels / blankets they covered me with after being wheeled into the operating room.  It was great.  😀 The difference?  The difference?  These days, you’re pretty much out of it by the time you enter the room.

The third one, as I said, was this past Monday.  It was supposed to be last year – as in last May.  But Dewey (the little guy in the picture at the top) had been diagnosed with lymphoma a few months before that.  Since he had to go in for chemo every other week or so – or the emergency room on a moments notice – I delayed my surgery to be able to take care of him.  you can read about his adventures here (learning from a dog – again), here (still learning from a dog) and here (a very special dog – a very sad day).  As you can tell, Dewey didn’t make it.  He did have 8 really good months though.  You see, with people – the goal is to do whatever it takes to kill off the cancer, and the side effects are pretty bad.  With dogs – the goal is to provide as good a quality of life as possible for as long as possible, with the side effects being kept as mild as possible as well.  Dewey had more trouble than most with the side effects.  They actually ran out of alternative drug therapies for him.
Having said that – Dewey enjoyed life through nearly the entire process.  He ended up in the ER 3 times – but within a day or two, he bounced right back as if nothing happened.  He thoroughly enjoyed his experiences – whether it be sticking his head out the window, on the way to an appointment, with his floppy ears flying in the wind – or all the attention he was getting while they spend up to an hour (or more on a couple occasions) slowly pumping the chemo into him – or any of the other attention he got.  He absolutely loved going to his regular vet, the cancer center, the ER – whatever.

So with this third surgery – I learned from Dewey.  In spite of my previous experiences, I decided I was going to “enjoy” this one the way Dewey did.  So, whether it was the initial appointment with the surgeon, the pre-op testing – the pre-op preparation – the surgery itself – the post-op recovery – I was going to meet all these people, and make the most of it.  You have to know – that’s not me.  I hate meeting people.  I get overwhelmed with all those people scurrying around me to do things.  But this time – I talked to everyone – joked with them – talked about stuff – including two nurses standing in the hallway, talking to each other as I was being wheeled past – and I asked if they were talking about The Shack.  They were wondering what it was like – asked if I’d seen it yet.  I said no – but I’m going next week (which is now tomorrow – the day after writing this).

It was a good experience.

Like I said – Dewey would be proud of me.

Oh yeah – I mentioned someone else would as well.

That would be God.

I finally learned something from Him as well.

Lk 12:22 Then Jesus said to his disciples: “Therefore I tell you, do not worry about your life, what you will eat; or about your body, what you will wear. 23 Life is more than food, and the body more than clothes. 24 Consider the ravens: They do not sow or reap, they have no storeroom or barn; yet God feeds them. And how much more valuable you are than birds! 25 Who of you by worrying can add a single hour to his life ? 26 Since you cannot do this very little thing, why do you worry about the rest?

Yes.  If God is finished with me on this earth and wants to call me home – then that’s His choice and I’m good with it.
But as long as He’s not done with me yet, then who can possibly take care of me better than Him?  Why should I worry?  And why should I not follow the example of Dewey, who God brought into my life – and enjoy the experiences that come along the way?

So – yeah – I think Dewey and God are both proud of me.